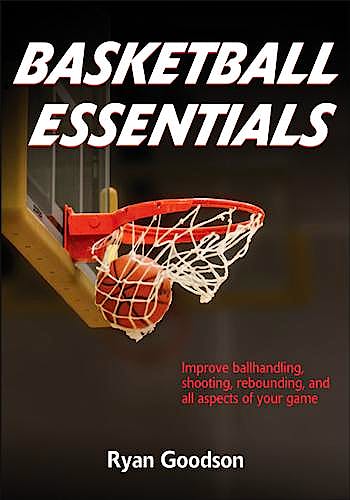 LeBron James, Stephen Curry, Kevin Durant, and all of the best basketball players in the world began their careers in the same way: by focusing on the fundamentals. With Basketball Essentials there hasnever been a better way to learn to play!

In Basketball Essentials, you learn by doing. Sequential instruction and detailed photographs will guide you to perform the techniques and tactics of the game:
Shooting
Passing
Dribbling
Defending
Rebounding

In addition to the basics, you’ll be challenged to expand your repertoire of skills and use those newly acquired tactics for competitive advantage. More than 100 of the best practice drills will develop yourgame and improve your performance. You’ll gain an understanding of the game, offensive and defensive strategies, and proven plays.

Basketball Essentials is the best way to learn the basics in less time. It’s the only guide that teaches the skills and the love of the game.

Ryan Goodson is a world-renowned coach and clinician of basketball skill development. Since 2009 he has trained more than 15,000 players from the youth to the professional levels and has conductedclinics in 30 states and 5 countries. Goodson is widely sought after to direct youth basketball camps across the globe because of his engaging teaching style and dynamic demonstrations.

Goodson directed the Stephen Curry Skills Academy in 2011 and is consistently contracted to direct camps for the United States Basketball Association. He has also developed a huge basketball followingonline. His instructional videos have been viewed more than five million times worldwide. Goodson earned a bachelor’s degree in health promotion from Appalachian State University.