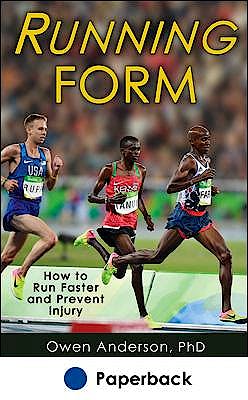 Running Form. How to Run Faster and Prevent Injury

Introduction. The Importance of Form

Index
About the Author

For many runners, running technique is an afterthought—one they don’t think about until an injury or plateau keeps them from achieving their goals. Running Form underscores the importance of proper form and shows you how to elevate your performance to the greatest possible extent with the smallest risk of injury.

Owen Anderson, PhD, is a coach to elite runners from around the globe. In Running Form, he describes the common problem of runners moving on “square wheels” by braking with each step, adopting inefficient stances, or risking injury with excessive ground impact. He pinpoints the components of good form—foot-strike, shin and shank angle, stance time, cadence, body lean, and posture—to help you understand where you can make small changes that offer significant improvements.

Then, using a basic video camera or smartphone, you can analyze your own form and apply specific drills and exercises to correct any deficiencies. Numerous photos incorporate lines and arrows to help you clearly identify the appropriate angles and movements of sound technique. No expensive software or biomechanics degree is required to learn how to run faster and with more efficiency and to significantly reduce your risk of injury.

Get rid of those running patterns that hurt performance and destroy running economy. Running Form gives you the knowledge to perfect your running form so you can train consistently and improve with each stride.

Owen Anderson, PhD, is the coach and manager of some of the best runners in the world, including Cynthia Limo (silver medalist in the 2016 IAAF World Half Marathon Championship and first-ranked road racer in the world according to ARRS in 2016), Mary Wacera (world silver and bronze medalist in the 2014 and 2016 IAAF World Half Marathons), Monicah Ngige (two-time winner of the Cooper River Bridge Run 10K and champion of the 2017 Monterey Bay Half Marathon), Mary Wangui (victor at the 2017 Tulsa Run 15K), Iveen Chepkemoi (first in the 2017 AK Sotik Cross Country meeting in Kenya), and Gladys Kipsoi (winner of the 2017 Pittsburgh Half Marathon).

Owen has been a featured speaker at symposiums around the world, including seminars at City University, London; Osaka University; and the University of Tokyo. Owen, who speaks Swahili fluently, has traveled to Kenya on 25 different occasions to manage running camps, recruit elite athletes, and study the training habits and nutritional practices of elite Kenyan runners. During the summer, he hosts running camps throughout the United States.

In his free time, Owen enjoys helping kids. He assisted in rescuing Kenyan children from the Tana Delta region during the savage conflicts of 2013 and has helped these young people resume their academic pursuits.