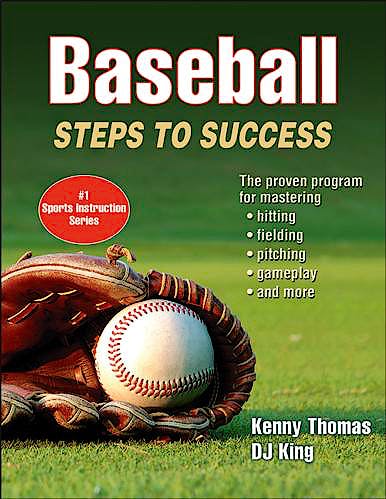 Become a fundamentally sound player in every aspect of the game with Baseball: Steps to Success. For years, the Steps to Success series has helped people around the world master the fundamentals of sport. Its unique progressive instructional approach to every skill makes learning the game of baseball easier and more enjoyable than ever before.

With Baseball: Steps to Success, the road map to becoming a five-tool player is at your fingertips. Step out of the dugout and onto the diamond with confidence in your skills in the game’s most important areas:

Drawing on more than 70 self-improvement and practice drills that include skills broken down to their most basic techniques, you’ll be a threat every time you step to the plate or take the mound. Baseball: Steps to Success leaves no area of the game uncovered.

Whether you’re learning, teaching, or coaching, Baseball: Steps to Success will help you master this great game. Part of the best-selling series with more than 1.7 million copies sold, it is your guide to on-the-field excellence.

Climbing the Steps to Baseball Success

The Sport of Baseball

Since becoming the head coach of the University of South Carolina Aiken baseball program in 2000, Kenny Thomas has re-established the Pacers as a force in the Peach Belt Conference and a perennial top 25 team in NCAA Division II.

Thomas has coached 67 players who have been drafted and signed in the Major League Baseball free agent draft. He’s coached 102 All-Conference players, 17 All-Americans, six conference Players of the Year, one Southeast Region Player of the Year, and one National Player of the Year. Under Thomas’s direction, USC Aiken has had five straight years (2012-2016) with a player selected within the first 15 rounds of the MLB draft.

King was the head coach of the Dubuque Waves in the River Valley League in Iowa for one summer, where he was selected to manage the league’s all-star team. For two summers he was also the head coach of the Waynesboro Generals in the Valley Baseball League in Virginia; the team won the Valley League Championship in 2014 and fell just short in 2015, losing in the semifinal round.

Before his coaching career, King won back-to-back state championships at Parkview High School, where he played for legendary coach Hugh Buchanan. He played collegiate ball at Chattahoochee Valley, where he was an All-Conference pitcher. He concluded his playing career at Shorter College.