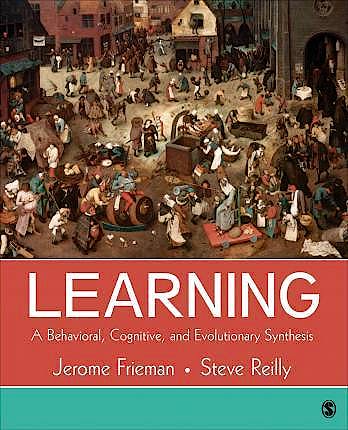 Chapter 1: Where Learning Fits Into the Big Picture
What Is Knowledge?
How Can We Study Something We Cannot See?
Defining Various Kinds of Learning by Procedures and Phenomena
The Evolution of Learning
Learning Is an Adaptive Specialization
Learning Is Part of an Integrated System of Psychological Processes

Current research on learning reflects three themes: a methodological behavioral theme that focuses on how certain experiences lead to changes in behavior, a cognitive theme that focuses on how experiences are represented in memory, and an evolutionary/adaptive behavior theme that focuses on the various kinds of learning as adaptive specializations that evolved through the mechanism of natural selection. Frieman and Reilly interweave these themes to present an integrated and coherent account of the current state of knowledge within the study of learning. The evolutionary/adaptive behavior theme is the central theme within which the cognitive and behavioral themes are developed.

The authors tell a story rather than providing only a survey of research and theoretical controversies. Experimental designs, the implications of what we learn from laboratory research for understanding human behavior, and the relationship between learning and other psychological constructs like motivation, perception, and memory are discussed where appropriate and not consigned to separate chapters. Likewise, the historical development of ideas and procedures is woven into the narrative and not confined to a single chapter.

The authors' overriding goal is to show those students who may never take another course in learning that this topic is interesting and important for their understanding of both human and non-human animal behavior.

Jerome Frieman earned his PhD from Kent State University in Ohio. He has been at Kansas State University since 1968. Over the course of his career, he engaged in research on operant conditioning in pigeons, rats, and dwarf hamsters; Pavlovian conditioning in rats; social learning in dwarf hamsters; and extraordinary memory in a human participant. He is the author of Learning and Adaptive Behavior and co-author of Memory Search by a Memorist. Steve Reilly obtained his D.Phil. from the University of York, England, for research concerning the neural basis of learning and memory. He has held positions in England, Canada and the United States, and is now in the Department of Psychology at the University of Illinois at Chicago. His research focuses on the neural mechanisms and functional neuroanatomy of conditioned taste aversion learning and incentive learning. Dr. Reilly is the editor of two books (Conditioned Taste Aversion: Behavioral and Neural Processes and Associative Learning and Conditioning Theory: Human and Non-Human Applications) and is currently on the editorial boards of the International Journal of Comparative Psychology and Behavioral Neuroscience.