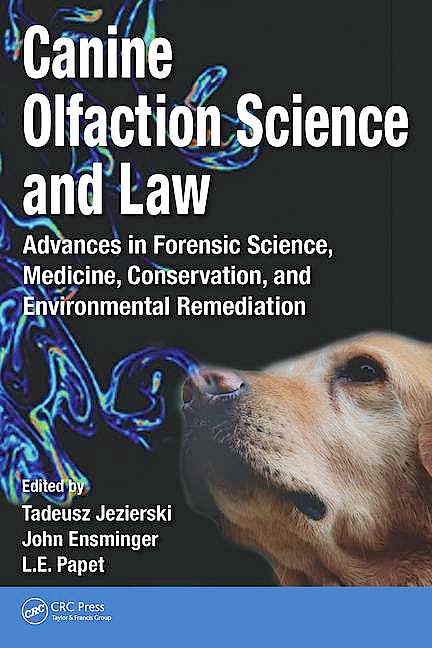 The value of the canine nose is well-documented, and working dogs are being utilized for their olfactory skills in an increasing number of fields. Not only are dogs used by police, security, and the military, but they are also now used in forensic science, in medical detection of disease, in calculating population trends of endangered species and eradicating invasive species in protected environments, and in identifying infestations and chemical contaminants.

Edited and contributed to by eminent scholars,Canine Olfaction Science and Law: Advances in Forensic Science, Medicine, Conservation, and Environmental Remediation;takes a systematic scientific approach to canine olfaction. It includes work from scientists working in pure and applied disciplines, trainers and handlers who have trained and deployed detection dogs, and lawyers who have evaluated evidence produced with the aid of detection and scent identification dogs.

The book is divided into six sections covering

The various contributors describe cutting edge research, some conclusions of which are the subject of vigorous debates between various laboratories and researchers. The editors have added cross-references so that readers can consider the different perspectives that are currently being advanced and understand where consensus is being built and where more research needs to be done.

A useful practical reference,Canine Olfaction Science and Law;provides a wealth of information beneficial to a wide range of disciplines. It aids trainers and handlers of detection dogs as well as various professionals in healthcare, law enforcement, forensic science, and environmental conservation to gain a better understanding of the remarkable power of the canine nose while encouraging further advances in applications.

ANATOMY, GENETICS, NEUROLOGY, DISEASE, AND EVOLUTION
CHEMISTRY AND AERODYNAMICS OF ODORS
BEHAVIOR, LEARNING, AND TRAINING
USES IN FORENSICS AND LAW
USES IN CONSERVATION AND REMEDIATION
USES IN DETECTION OF DISEASES AND MEDICAL CONDITIONS

Tadeusz Jezierski;is professor of agricultural science at the Institute of Genetics and Animal Breeding of the Polish Academy of Sciences. He has been a full professor at the institute since 1999 and is the head of the institutes Department of Animal Behavior. He is an internationally known author on a wide range of topics and has written papers on animal behavior, genetics, and animal welfare. His recent research interests include operant conditioning of sniffer dogs, behavioral genetics, human;animal interactions and the human;animal bond, genetic and environmental factors influencing social and sexual behavior of farm animals, feeding behavior, and emotional behavior and physiological reactions in farm animals. He has written 73 peer-reviewed publications in scientific journals, four monographs, four handbooks, 11 book chapters, and 111 conference reports.

John Ensminger,is an attorney who has practiced in the areas of constitutional law, mental patient civil rights, taxation of financial instruments, anti-money laundering and counterfinancing of terrorism, and most recently the law as it applies to skilled dogs. He has written over 30 papers on these topics, with articles on service and police dogs appearing in numerous journals. He is also a contributing editor for the website of the Animal Legal and Historical Center of the Michigan State University College of Law. He has written two books on specialized dogs,Service and Therapy Dogs in American SocietyandPolice and Military Dogs.

L.E. Papetis the owner and operator of K9 Resources, LLC, a privately held licensed investigative firm that specializes in the use of detection canines. As a scientific data-driven canine trainer, handler, and consultant, his primary focus is the training, testing and use of canines in olfactory disciplines including, but not limited to, explosives, illicit drugs, humans (live and deceased), pharmaceuticals, alcohol, accelerants, and many other forms of contraband and odor for both public and private sectors. He has trained hundreds of local, state, and federal officials, has written over 170 protocols for the training, testing, safety, deployment, and implementation of detection canines, and has received commendations for his work. He enjoys contributing to works involving working dogs employing the use of their olfactory skills and may be contacted at lep@k9resources.com.