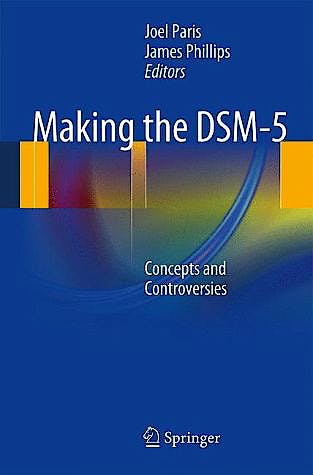 Making the Dsm-5. Concepts and Controversies

In 2013, the American Psychiatric Association published the 5th edition of its Diagnostic and Statistical Manual of Mental Disorders (DSM-5). Often referred to as the “bible” of psychiatry, the manual only classifies mental disorders and does not explain them or guide their treatment. While science should be the basis of any diagnostic system, to date, there is no knowledge on whether most conditions listed in the manual are true diseases. Moreover, in DSM-5 the overall definition of mental disorder is weak, failing to distinguish psychopathology from normality. In spite of all the progress that has been made in neuroscience over the last few decades, the psychiatric community is no closer to understanding the etiology and pathogenesis of mental disorders than it was fifty years ago.

In Making the DSM-5, prominent experts delve into the debate about psychiatric nosology and examine the conceptual and pragmatic issues underlying the new manual. While retracing the historic controversy over DSM, considering the political context and economic impact of the manual, and focusing on what was revised or left unchanged in the new edition, this timely volume addresses the main concerns of the future of psychiatry and questions whether the DSM legacy can truly improve the specialty and advance its goals.

2. The History of DSM
Edward Shorter

4. The Ideology behind DSM-5
Joel Paris

5. The Biopolitics of Defining “Mental Disorder”
Warren A. Kinghorn

7. The Paradox of Professional Success: Grand Ambition, Furious Resistance, and the Derailment of the DSM-5 Revision
Owen Whooley and Allan V. Horwitz

9. Overdiagnosis, Underdiagnosis, Synthesis: A Dialectic for Psychiatry and the DSM
Joseph M. Pierre

10. What does Phenomenology Contribute to the Debate about DSM-5
Aaron Mishara and Michael A. Schwartz