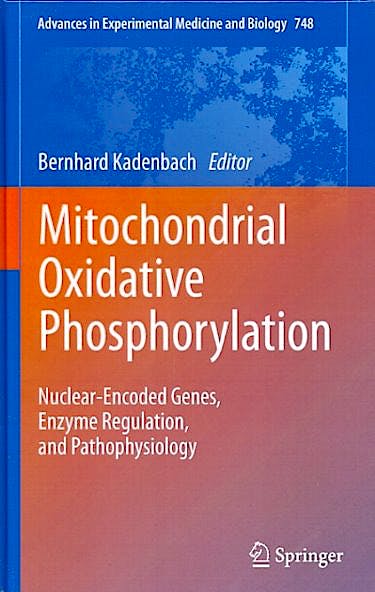 This book will describe the nuclear encoded genes and their expressed proteins of mitochondrial oxidative phosphorylation. Most of these genes occur in eukaryotic cells, but not in bacteria or archaea. The main function of mitochondria, the synthesis of ATP, is performed at subunits of proton pumps (complexes I, III, IV and V), which are encoded on mitochondrial DNA. The nuclear encoded subunits have mostly a regulatory function. However, the specific physiological functions of the nuclear encoded subunits of complexes I, III, IV, and V are mostly unknown. New data indicates that they are essential for life of higher organisms, which is characterized by an adult life without cell division (postmeiotic stage) in most tissues, after the juvenile growth. For complex IV (cytochrome c oxidase) some of these subunits occur in tissue-specific (subunits IV, VIa, VIb, VIIa, VIII), developmental-specific (subunits IV, VIa, and VIIa) as well as species-specific isoforms. Defective genes of some subunits were shown to induce mitochondrial diseases. Mitochondrial genes and human diseases will also be covered.