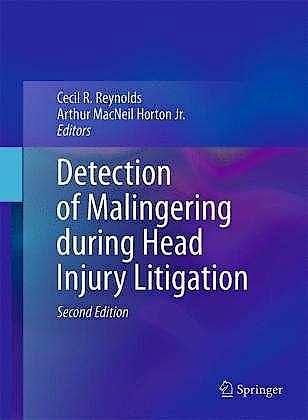 Increased public awareness of traumatic brain injuries has fueled a number of significant developments: on the one hand, more funding and more research related to these injuries and their resulting deficits; on the other, the possibility of higher stakes in personal injury suits - and more reasons for individuals to feign injury. Expanding both the conceptual and clinical knowledge base on the subject, the second edition of Detection of Malingering during Head Injury Litigation offers the latest detection tools and techniques for veteran and novice alike. As in its incarnation, this practical revision demonstrates how to combine clinical expertise, carefully-gathered data, and the use of actuarial models as well as common sense in making sound evaluations and reducing ambiguous results. And, the book navigates the reader through the many caveats that come with the job, beginning with the scenario that an individual may be malingering despite having an actual brain injury. Professional neuropsychologists and forensic psychologists will appreciate this new edition of Detection of Malingering during Head Injury Litigation as an invaluable source of refinements to their craft, and improvement as an expert witness.

Cecil R. Reynolds, PhD, ABPN, earned his Doctoral Degree from the University of Georgia in 1978 under the tutelage of Dr. Alan S. Kaufman, with a major in School Psychology and minors in Statistics and in Clinical Neuropsychology. He served an internship divided between the Medical College of Georgia (Pediatric Neurology section and Neurological Surgery section) and the Rutland Center for Severely Emotional Disturbed Children. Prior to joining the Texas A & M University faculty in 1981, Dr. Reynolds was a faculty member at the University of Nebraska-Lincoln, where he served as Associate Director and Acting Director of the Buros Institute of Mental Measurement, after writing the grants and proposals to move the Institute to Nebraska following the death of its founder, Oscar Buros. His primary research interests are in all aspects of psychological assessment with particular emphasis on assessment of memory, emotional and affective states and traits, and issues of cultural bias in testing. He is the author of more than 300 scholarly publications and author or editor of 39 books, as well as several widely used tests of personality and behavior. He maintained a clinical practice treating trauma victims and individuals with traumatic brain injury for 25 years before retiring from clinical work at the end of 2003.Dr. Reynolds holds a Diplomate in Clinical Neuropsychology from the American Board of Professional Neuropsychology, of which he is also a past president, and had a Diplomate in School Psychology of the American Board of Professional Psychology, prior to retiring his Diplomate in 2004. He is a past president of the National Academy of Neuropsychology, APA Division 5 (Evaluation, Measurement, and Statistics); APA Division 40 (Clinical Neuropsychology); and APA Div. 16 (School Psychology). He is a Fellow of APA Divisions 1, 5, 15, 16, 40, and 53. Dr. Reynolds teaches courses primarily in the areas of psychological testing and diagnosis and in neuropsychology in addition to supervising clinical practice in testing and assessment. He served as Editor in Chief of Archives of Clinical Neuropsychology (1990-2002), the official journal of the National Academy of Neuropsychology and serves on the editorial boards of 11 other journals in the field. He is the current Editor of Applied Neuropsychology and is Associate Editor of School Psychology Quarterly. Dr. Reynolds has received multiple national awards recognizing him for excellence in research including the Lightner Witmer Award and the early career awards from APA Divisions 5 and 15. He is a co-recipient of the Society for the Psychological Study of Social Issues Robert Chin Award and a MENSA best research article award. In 1999, Dr. Reynolds received the Senior Scientist Award from APA Division 16 (School Psychology). In 2000, he received the National Academy of Neuropsychology’s Distinguished Neuropsychologist Award, the Academy’s highest award for research accomplishments. He received the NASP 2003 Lifetime Achievement Award in Neuropsychology. His service to the profession and to society has been recognized as well through the President's Gold Medal for Service to the National Academy of Neuropsychology as well as the Academy’s Distinguished Service Award. He is currently a Professor of Educational Psychology, Professor of Neuroscience, and Distinguished Research Scholar at Texas A & M University.