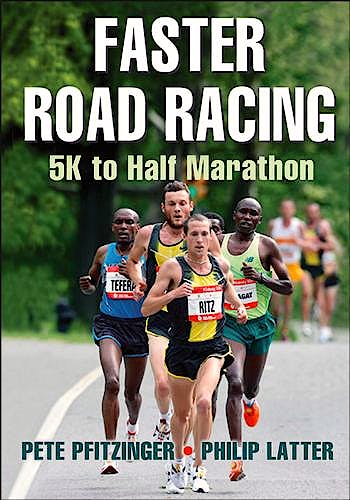 Renowned running authority, coach, and best-selling author Pete Pfitzinger teams with Philip Latter, senior writer for Running Times, in this must-have training guide for the most popular race distances, including the 5K, 10K, and half marathon.

Faster Road Racing: 5K to Half Marathon presents easy-to-follow programs proven to give you an edge in your next race. You’ll discover detailed plans for race-specific distances as well as expert advice on balancing training and recovery, cross-training, nutrition, tapering, and training over age 40. And for serious runners who compete in numerous races throughout the year, Pfitzinger’s multi-race, multi-distance training plans are invaluable.

Faster Road Racing is your all-inclusive resource on running your fastest at distances of 5K, 8K to 10K, 15K to 10 miles, and the half marathon.

References and Recommended Readings
Index
About the Authors

Serious runners, mostly at the intermediate to advanced levels, who race the most popular events from the 5K to half marathon. Also running coaches.

Pete Pfitzinger, the top American finisher in the 1984 and 1988 Olympic marathons, is a respected coach, exercise physiologist, and administrator of high-performance sport. He established himself as one of the best marathoners in U.S. history by outkicking Alberto Salazar to win the 1984 U.S. Olympic Trials. That same year he received the DeCelle Award for America’s best distance runner and was named Runner of the Year by the Road Runners Club of America. He is also a two-time winner of the San Francisco Marathon and finished third in the 1987 New York City Marathon. He is a member of the Road Runners Club of America’s Hall of Fame.

Although best known as a marathoner, Pfitzinger was highly successful at shorter distances with personal bests of 22:46 for 5 miles, 28:41 for 10K, 43:37 for 15K, and 1:03:14 for the half marathon. He won national championships at 15K and 30K and held the American record for 20 miles. As a coach, Pfitzinger has more than 30 years’ experience helping runners achieve their personal goals, whether it’s completing their first 5K or competing with distinction on the world stage. He is currently responsible for coaching, athlete development, and performance planning as a general manager for High Performance Sport New Zealand, supporting over 400 Olympic-level and emerging international athletes.

Pfitzinger is also a successful author, having written Road Racing for Serious Runners (1998), Advanced Marathoning (2001), and Advanced Marathoning, Second Edition (2009), all from Human Kinetics. He was a senior writer for Running Times from 1997 to 2008 and author of the magazine’s most popular column, “The Pfitzinger Lab Report.”
Pfitzinger is a graduate of Cornell University (BSc, MBA) and the University of Massachusetts (MSc exercise science). He and his wife, New Zealand track Olympian Christine Pfitzinger, live in New Zealand with their two daughters, Annika and Katrina.

Philip Latter is a senior writer for Running Times and the head cross country coach at Swain County High School in North Carolina. He has also been the head cross country coach at Radford University in Virginia and the lead assistant at Fort Collins High School in Colorado, where he helped guide the Lambkins to three Nike Cross Nationals appearances. In addition to Running Times, his writing has appeared in Runner’s World and on RunnersWorld.com and ESPNRise.com.
A runner for more than 15 years, Latter set four school records at the University of North Carolina at Asheville and was a five-time All-Big South runner and a two-time member of the All-Academic team. He holds PRs of 4:01 (1500 meters), 8:32 (3000 meters), 14:47 (5000 meters), 31:24 (10,000 meters), and 1:12:11 (half marathon).

Latter lives in Bryson City, North Carolina, with his wife, Macy, and two daughters, Aspen and Willow. He continues to train seriously for road races of all distances, mostly on the trails of the Great Smoky Mountain National Park, which sits exactly one mile from his doorstep.