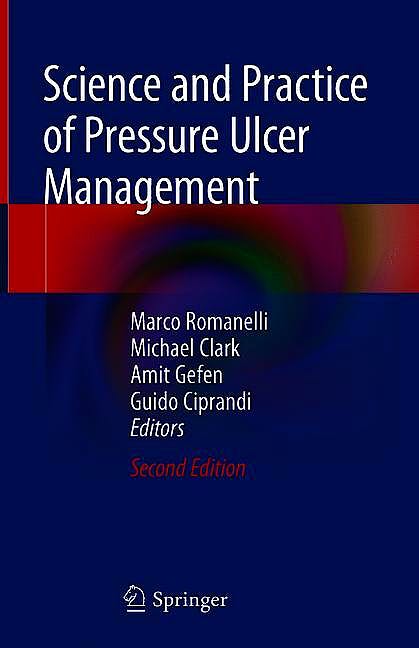 Only comprehensive reference book on pressure ulcers and their management

Only book in its field endorsed by the European Pressure Ulcer Advisory Panel, the leading European authority on pressure ulcers

This second edition aims to be the primary reference for pressure ulcers from diagnosis and prevention to management and treatment options.

The book is relevant to dermatology clinicians, vascular surgeons, and dermatology nurses.

Prof. Marco Romanelli, MD, Ph.D is a Founding Member and Past-President of the European Pressure Ulcer Advisory Panel (EPUAP). Dr. Romanelli served as the President and Council Member of the European Wound Management Association (EWMA), Executive Board member of the World Union Wound Healing Society (WUWHS). He was the President of the Italian Association for Cutaneous Ulcer (AIUC). He has a special interest in wound assessment using physical measurements, inflammatory ulcers, biochemical markers in wound healing and has published widely in this field, in which he continues to undertake research. Dr. Romanelli is on the editorial board of the journals WOUNDS, Wound Repair and Regeneration, The International Journal of Lower Extremity Wounds, Journal of Wound Care, International Wound Journal, Acta Vulnologica & Journal of Tissue Viability Nurses Society. He is a director of the Wound Healing Research Unit within the University of Pisa in Italy and leads a research group actively involved in clinical, laboratory and educational activities. He serves as a Member of Medical Advisory Board at Systagenix Wound Management, Limited. Dr. Romanelli is a Board certified, Consultant Dermatologist at the Department of Dermatology, University of Pisa and received a PhD in Experimental Dermatology from the University of Naples.

Michael Clark is Director of the Welsh Wound Network. A zoologist by training, Professor Clark has worked in tissue viability and wound healing since 1980. He is Professor in Tissue Viability, Birmingham City University, UK supporting their Tissue Viability Practice Development Unit one day a week. Between 2003 and 2009 he was a member of the Wound Healing Research Unit, Cardiff University and had responsibility for physical measurement research within the WHRU. From 2009-2013 Professor Clark managed the Welsh Wound Network while also acting as an independent consultant. Professor Clark was until recently Chief Executive of the Lindsay Leg Club Foundation and has been President of the European Pressure Ulcer Advisory Panel. He was Editor in Chief of the Journal of Tissue Viability from 2000 to 2010 and now serves as Emeritus Editor of that publication.

Prof. Amit Gefen received the B.Sc. in Mechanical Engineering and M.Sc. and Ph.D. in Biomedical Engineering from Tel Aviv University in 1994, 1997, and 2001, respectively. During 2002-2003 he was a post-doctoral fellow at the University of Pennsylvania, USA. He is currently a Full Professor with the Department of Biomedical Engineering at the Faculty of Engineering of Tel Aviv University and the Herbert J. Berman Chair in Vascular Bioengineering. The research interests of Prof. Gefen are in studying normal and pathological effects of biomechanical factors on the structure and function of cells, tissues and organs, with emphasis on applications in chronic wound research. In 2007-2008 he was a visiting scientist at Eindhoven University of Technology in the Netherlands, where he developed tissue-engineered model systems to study pressure ulcers. To date, Prof. Gefen published more than 200 articles in peer-reviewed international journals, many of which on mechanobiology, cell and tissue biomechanics, with applications that are mostly in chronic wound prevention.

Guido Ciprandi graduated from University of Rome La Sapienza (UR1) in 1982, 1987 and University of Rome Tor Vergata (UR2) in 1992. His training in general and thoracic surgery was done at the Clinics for General Surgery and Thoracic Surgery of UR1 and UR2, and in Pediatric Surgery at the Bambino Gesu' Children's Hospital, in Rome. He spent the next years between the Microvascular Clinics of Saint Joseph Hospital in Paris, Children's Hospital in Boston and La Timone Hospital "des Enfants Malades" in Marseille. In 2001, he became responsible for the Experimental Laboratory Research Center in Palidoro, at Bambino Gesu' Children's Hospital. In 2012 he was appointed Managing Director for Pressure Ulcer and Complex Lesions Project in the Unit of Plastic and Maxillofacial Surgery, Department of Surgery, Bambino Gesu' Children's Hospital, IRCCS, Rome, Italy. Dr. Ciprandi is a member of numerous national and international organizations, including the European Pediatric Surgical Association, Italian Association for Pediatric Surgery, European Wound Management Association. He is also Trustee in European Pressure Ulcer Advisory Panel and President of the International Society of Pediatric Wound Care.
show less