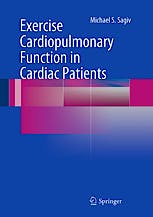 Exercise Cardiopulmonary Function in Cardiac Patients represents an extended review of exercise cardiopulmonary function in both cardiac patients and healthy subjects. A large part of the book deals with the influence of exercise on the cardiopulmonary system, while sections are devoted to an investigation of cardiopulmonary physiology underlying the cardiac disease process in these patients. This approach enables a wide range of complex cardiac problems to be reviewed. The material presented in the book is ideal in terms of understanding cardiac disease and its management via the application of changes to the patient's physical activity.

Based on the assumption that the reader should at least be acquainted with medical physiology, especially of the cardiopulmonary system, this book expands upon the reader's understanding of the cardiopulmonary response to various modes of exercise in healthy subjects, since to understand pathology, one has to know healthy responses. Therefore this book will be of particular interest to trainees in internal medicine, cardiology, intensive care, anesthesiology and emergency medicine.