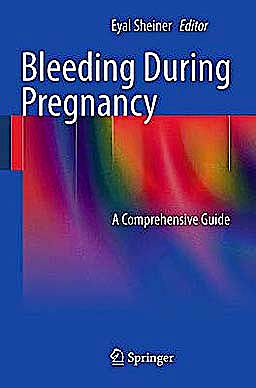 Bleeding during Pregnancy. A Comprehensive Guide

Bleeding during pregnancy is not a rare phenomenon and has been associated with significant maternal and fetal morbidities and even mortality. Although vaginal bleeding occurs mainly during the first trimester, it can appear at any stage of pregnancy and during the post-partum period. This sometimes life-threatening event requires an extensive work-up in order to recognize its cause and establish a rapid and effective therapeutic approach. Bleeding During Pregnancy: A Comprehensive Guide draws on evidence-based data and brings together updated information on all aspects of pregnancy-related bleeding. Chapters were contributed by a multidisciplinary team of international experts, including obstetricians, gynecologists, anesthesiologists, hematologists, oncologists and epidemiologists. Topics covered include: bleeding during early pregnancy (early pregnancy loss, ectopic pregnancy, gestational trophoblastic disease, and cancer of the reproductive tract during pregnancy; bleeding in late pregnancy (preterm delivery, placental abruption, placenta previa, vasa previa and uterine rupture); and post partum-hemorrhage. Intensive care of a patient with excessive bleeding and coagulotherapy during pregnancy or the post-partum period are also discussed. This book is an essential guide for a broad spectrum of clinicians and health care professionals who treat pregnant patients.

Eyal Sheiner, M.D, PhD, is a professor of Obstetrics and Gynecology at the Soroka University Medical Center, Ben-Gurion University of the Negev. In the last decade he has investigated and published extensively in the field of maternal-fetal medicine.