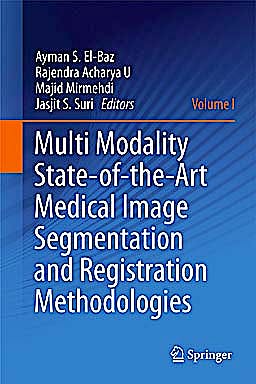 With the advances in image guided surgery for cancer treatment, the role of image segmentation and registration has become very critical. The central engine of any image guided surgery product is its ability to quantify the organ or segment the organ whether it is a magnetic resonance imaging (MRI) and computed tomography (CT), X-ray, PET, SPECT, Ultrasound, and Molecular imaging modality. Sophisticated segmentation algorithms can help the physicians delineate better the anatomical structures present in the input images, enhance the accuracy of medical diagnosis and facilitate the best treatment planning system designs. The focus of this book in towards the state of the art techniques in the area of image segmentation and registration.

Ayman S. El-Baz is currently assistant professor of Bioengineering in the Department of Bioengineering at the University of Louisville (UofL). Dr. El-Baz is an expert in the fields of bioimaging modeling and computer assisted diagnosis systems. Dr. El-Baz has extensive experience in automated detection, segmentation, and diagnosis of lung nodules in LDCT images. Dr. El-Baz received his Doctorate from University of Kentucky, Louisville, KY. Rajendra Acharya U, PhD, DEng is leader in the field of data mining and medical devices. He received two doctorates: one from National Institute of Technology Karnataka, Surathkal, India and second from Chiba University, Japan. He is a Senior IEEE member and on the editorial board of several journals. His major interests are in Signal and Image Processing, Visualization and Biophysics for better healthcare design, delivery and therapy. Currently, he is visiting faculty at Ngee Ann Polytechnic, Singapore. Majid Mirmehdi is a Professor of Computer Vision in the Computer Science Department at the University of Bristol. Prof. Mirmehdi has been involved in computer vision research for 22 years, particularly in the areas of medical imaging, quality inspection, and scene understanding. He has served as Chairman of the British Machine Vision Association, is a Senior Member of the IEEE, and was elected a Fellow of the International Association for Pattern Recognition in 2010. Dr. Jasjit S. Suri is an innovator, scientist, a visionary, an industrialist and an internationally known world leader in Biomedical Engineering. Dr. Suri has spent over 20 years in the field of biomedical engineering/devices and its management. He received his Doctrate from University of Washington, Seattle and Business Management Sciences from Weatherhead, Case Western Reserve University, Cleveland, Ohio. Dr. Suri was crowned with President’s Gold medal in 1980 and the Fellow of American Institute of Medical and Biological Engineering for his outstanding contributions.