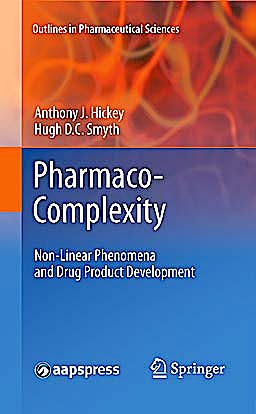 The historical approach to the interpretation of physical, chemical and biological phenomena has been to consider relationships with causative factors that can be reduced to linearity allowing simple and direct interpretation. However, it is increasingly evident that there is often more information in the data than linear interpretations allow. The current capacity for computers to assist in identifying non-linear relationships allows greater interpretation of data which illuminates the phenomena allowing the information to be translated into knowledge that can be used wisely to promote various desirable pharmaceutical outcomes. This short volume is intended to stimulate the reader to contemplate research and development areas in which the data might be more accurately interpreted to allow greater understanding and ultimately control of the pharmaceutically complex phenomena.

Dr. Anthony Hickey is Professor of Molecular Pharmaceutics and Biomedical Engineering at the University of North Carolina at Chapel Hill. He is a fellow of the Institute of Biology, American Association of Pharmaceutical Scientists and the American Association for the Advancement of Science. He has published several edited and authored volumes in the fields of pharmaceutical aerosols, process engineering and particulate science.

Dr. Hugh Smyth is Assistant Professor of Pharmaceutics at the University of Texas, Austin. He is a recipient of the Young Investigator in Pharmaceutics and Pharmaceutical Technology Award of the American Association of Pharmaceutical Scientists and has edited a volume on pulmonary drug delivery. Drs. Hickey and Smyth share a research interest in the delivery of drugs to the lungs for the treatment and prevention of a number of diseases.