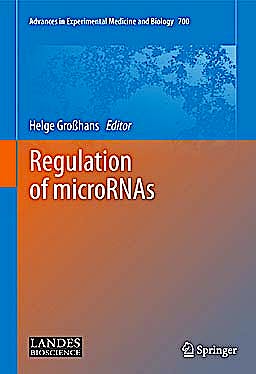 Regulation of Micrornas (Advances in Experimental Medicine and Biology, Vol. 700)

Given this pervasiveness and importance of miRNA-mediated gene regulation, it should come as little surprise that miRNAs themselves are also highly regulated. However, the recent explosion of knowledge on this topic has been remarkable, providing a primary motivation for publication of this book. As miRNAs are transcribed by RNA polymerase II, the enzyme that also generates mRNAs, it was perhaps not unexpected that miRNA transcription would be subject to regulation, and we have willfully mitted this aspect from this monograph. However, what has been unexpected is the extent of post-transcriptional regulation of miRNAs that is illustrated in this book.

Helge Großhans, PhD is a research group leader at the Friedrich Miescher Institute for Biomedical Research (FMI), which is part of the Novartis Research Foundation in Basel, Switzerland. His main research interests are in the developmental function, regulation, and mechanism of action of microRNAs. He received his PhD from the University of Heidelberg and did his postdoctoral training at Yale University. He is the winner of a 2009 ERC Award.