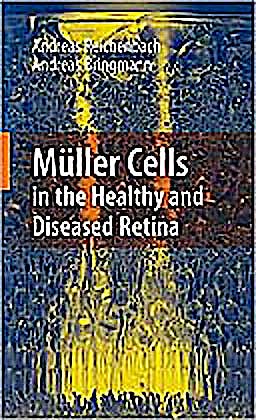 Müller Cells in the Healthy and Diseased Retina

Müller cells make up just 0.005% of the cells in our central nervous system. They do not belong to the more esteemed family of neuronal cells but to the glia, a family of cells that until recently were seen as mere filling material between the neurons. Now, however, all that has changed. Sharing the insights of more than a quarter century of research into Müller cells, Drs. Andreas Reichenbach and Andreas Bringmann of Leipzig University make a compelling case for the central role Müller cells play.

Everyone agrees that the eye is a very special and versatile sense organ, yet it has turned out in recent years that Müller cells are peculiar and multipotent glial cells. In the retina of most vertebrates and even of many mammals, Müller cells are the only type of (macro-) glial cells; thus, they are responsible for a wealth of neuron-supportive functions that, in the brain, rely upon a division of labour among astrocytes, oligodendrocytes, and ependymal cells. Even beyond such a role in the central nervous system as "model glia", Müller cells are adapted to several exciting roles in support of vision. They deliver the light stimuli to the photoreceptor cells in the inverted vertebrate retina, aid the processing of visual information, and are responsible for the homeostatic maintenance of the retinal extracellular milieu.

In Müller Cells in the Healthy and Diseased Retina, aimed not just at neurobiologists but at anyone concerned with retinal degeneration, every angle of Müller cells is covered, from an introduction to their basic properties, through their roles as ‘light cables’ and ‘shock absorbers’, to the part they play in diseases and disorders of the eye. Once these have all been covered in detail, the authors move on to discuss the future direction of research into these small but potent cellular phenomena.

Dr. Andreas Reichenbach was born in 1950 in Leipzig, Germany. He studied medicine and specialized as a physiologist, working on the mammalian retina. Since 1984, he has focused his efforts – and those of a growing number of fellows in his team – on Müller cell research. He has held a professorship at Leipzig University since 1994.

After studying biology, Dr. Andreas Bringmann (* 1960) worked in the field of systemic neurophysiology until he was inspired in 1996 by Andreas Reichenbach to research the most interesting cell, the Müller cell. He is now in the Department of Ophthalmology of the University of Leipzig where he is the head of the Basic Research Laboratory.