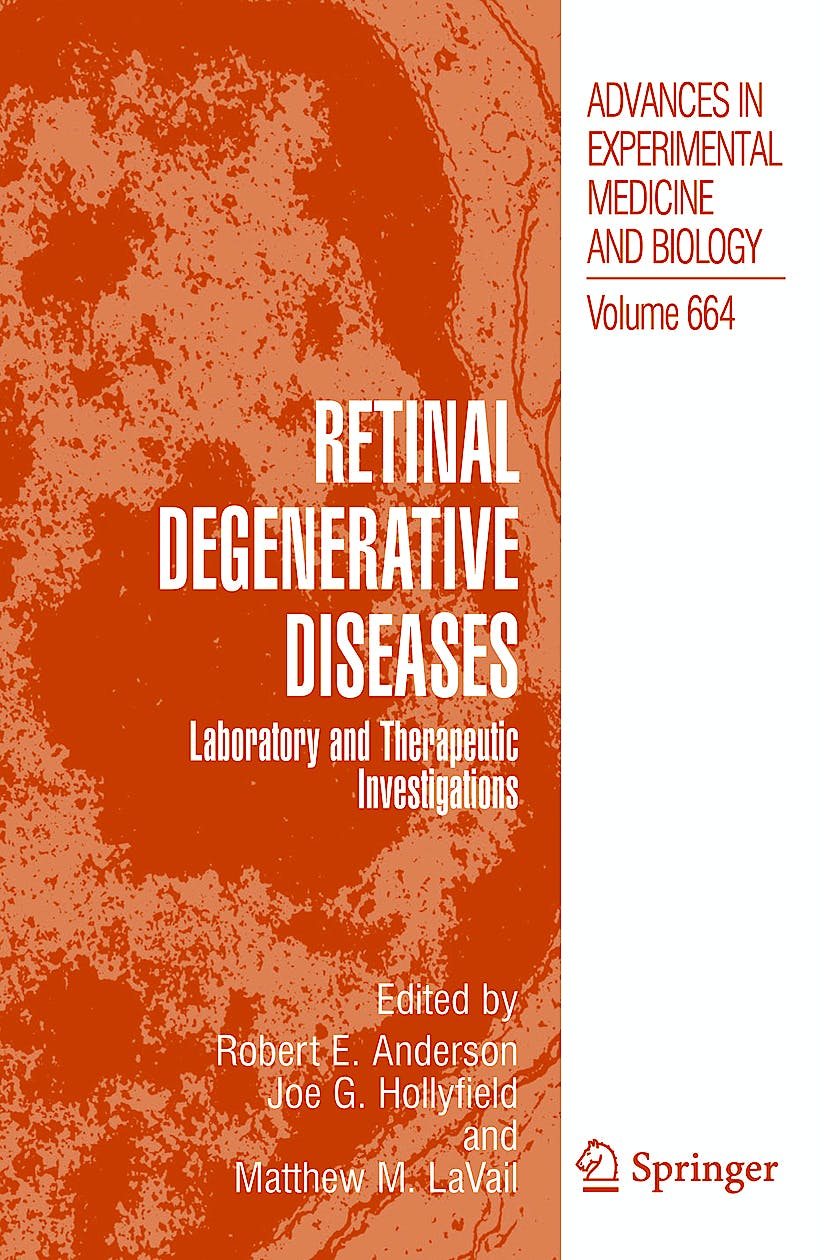 Robert E. Anderson, MD, PhD, is George Lynn Cross Research Professor, Dean A. McGee Professor of Ophthalmology, and Adjunct Professor of Biochemistry & Molecular Biology and Geriatric Medicine at The University of Oklahoma Health Sciences Center in Oklahoma City, Oklahoma. He is also Director of Research at the Dean A. McGee Eye Institute. He received his Ph.D. in Biochemistry (1968) from Texas A&M University and his M.D. from Baylor College of Medicine in 1975. In 1968, he was a postdoctoral fellow at Oak Ridge Associated Universities. At Baylor, he was appointed Assistant Professor in 1969, Associate Professor in 1976, and Professor in 1981. He joined the faculty of the University of Oklahoma Health Sciences Center in January of 1995. He has received several honorary appointments including Visiting Professor, West China School of Medicine, Sichuan University, Chengdu, China; Honorary Professorship, Xi’an Jiaotong University, Xi’an, China; and Honorary Professor of Sichuan Medical Science Academy, Sichuan Provincial People’s Hospital, Sichuan, China. Dr. Anderson has received the Sam and Bertha Brochstein Award for Outstanding Achievement in Retina Research from the Retina Research Foundation (1980), and the Dolly Green Award (1982) and two Senior Scientific Investigator Awards (1990 and 1997) from Research to Prevent Blindness, Inc. He received an Award for Outstanding Contributions to Vision Research from the Alcon Research Institute (1985), and the Marjorie Margolin Prize (1994). He has served on the editorial boards of Investigative Ophthalmology and Visual Science, Journal of Neuroscience Research, Neurochemistry International, Current Eye Research, and Experimental Eye Research. Dr. Anderson has published extensively in the areas of lipid metabolism in the retina and biochemistry of retinal degenerations. He has edited 14 books, 13 on retinal degenerations and one on the biochemistry of the eye. Dr. Anderson has received grants from the National Institutes of Health, The Retina Research Foundation, the Foundation Fighting Blindness, and Research to Prevent Blindness, Inc. He has been an active participant in the program committees of the Association for Research in Vision and Ophthalmology (ARVO) and was a trustee representing the Biochemistry and Molecular Biology section. He was named a Gold Fellow by ARVO in 2009. He has served on the Vision Research Program Committee and Board of Scientific Counselors of the National Eye Institute and the Board of the Basic and Clinical Science Series of The American Academy of Ophthalmology. Dr. Anderson is a past Councilor, Treasurer, and President of the International Society for Eye Research.

Matthew M. LaVail, PhD, is Professor of Anatomy and Ophthalmology at the University of California, San Francisco School of Medicine. He received his Ph.D. degree in Anatomy (1969) from the University of Texas Medical Branch in Galveston and was subsequently a postdoctoral fellow at Harvard Medical School. Dr. LaVail was appointed Assistant Professor of Neurology-Neuropathology at Harvard Medical School in 1973. In 1976, he moved to UCSF, where he was appointed Associate Professor of Anatomy. He was appointed to his current position in 1982, and in 1988, he also became director of the Retinitis Pigmentosa Research Center at UCSF, later named the Kearn Family Center for the Study of Retinal Degeneration. Dr. LaVail has published extensively in the research areas of photoreceptor-retinal pigment epithelial cell interactions, retinal development, circadian events in the retina, genetics of pigmentation and ocular abnormalities, inherited retinal degenerations, light-induced retinal degeneration, and pharmaceutical and gene therapy for retinal degenerative diseases. He has identified several naturally occurring murine models of human retinal degenerations and has developed transgenic mouse and rat models of others. He is the author of more than 150 research publications and has edited 13 books on inherited and environmentally induced retinal degenerations. Dr. LaVail has received the Fight for Sight Citation (1976); the Sundial Award from the Retina Foundation (1976); the Friedenwald Award from the Association for Research in Vision and Ophthalmology (ARVO, 1981); two Senior Scientific Investigators Awards from Research to Prevent Blindness (1988 and 1998); a MERIT Award from the National Eye Institute (1989); an Award for Outstanding Contributions to Vision Research from the Alcon Research Institute (1990); the Award of Merit from the Retina Research Foundation (1990); the first John A. Moran Prize for Vision Research from the University of Utah (1997); the first Trustee Award from The Foundation Fighting Blindness (1998); and the Llura Liggett Gund Award from the Foundation Fighting Blindness (2007). He has served on the editorial board of Investigative Ophthalmology and Visual Science and as an Executive Editor of Experimental Eye Research. Dr. LaVail has been an active participant in the program committee of ARVO and has served as a Trustee (Retinal Cell Biology Section) of ARVO. He was named a Gold Fellow of ARVO in 2009. He has been a member of the program committee and a Vice President of the International Society for Eye research. He has also served on the Scientific Advisory Board of the Foundation Fighting Blindness since 1973.

Joe G. Hollyfield, PhD, is the Llura and Gordon Gund Professor of Ophthalmology Research in the Cole Eye Institute at The Cleveland Clinic Foundation, Cleveland, Ohio. He received a Ph.D. from the University of Texas at Austin and did postdoctoral work at the Hubrecht Laboratory in Utrecht, The Netherlands. He has held faculty positions at Columbia University College of Physicians and Surgeons in New York City and at Baylor College of Medicine in Houston, Texas. He was Director of the Retinitis Pigmentosa Research Center in The Cullen Eye Institute at Baylor from 1978 until his move to The Cleveland Clinic Foundation in 1995. He is currently Director of the Foundation Fighting Blindness Research Center at The Cleveland Clinic Foundation. Dr. Hollyfield has published over 200 papers in the area of cell and developmental biology of the retina and retinal pigment epithelium in both normal and retinal degenerative tissue. He has edited 14 books, 13 on retinal degenerations and one on the structure of the eye. Dr. Hollyfield received the Marjorie W. Margolin Prize (1981, 1994), the Sam and Bertha Brochstein Award (1985) and the Award of Merit in Retina Research (1998) from the Retina Research Foundation; the Olga Keith Weiss Distinguished Scholars' Award (1981) and two Senior Scientific Investigator Awards (1988, 1994) from Research to Prevent Blindness, Inc.; an award for Outstanding Contributions to Vision Research from the Alcon Research Institute (1987); the Distinguished Alumnus Award (1991) from Hendrix College, Conway, Arkansas; the Endre A. Balazs Prize (1994) from the International Society for Eye Research (ISER); and the Proctor Medal (2009) from the Association for Research in Vision and Ophthalmology (ARVO). He was named a Gold Fellow by ARVO in 2009. He is currently Editor-in-Chief of the journal, Experimental Eye Research published by Elsevier. Dr. Hollyfield has been active in the Association for Research in Vision and Ophthalmology (ARVO) serving on the Program Committee (1976), as Trustee (Retinal Cell Biology, 1989-94), as President (1993-94) and as Immediate Past President (1994-95). He was also President (1988-91) and Secretary (1984-87) of the International Society of Eye Research. He is Chairman of the scientific review panel for the Macular Degeneration program of the American Health Assistance Foundation (Clarksburg, MD), serves on the scientific advisory boards of the Foundation Fighting Blindness (Owings Mills, MD), the Knights Templar Eye Research Foundation (Chicago, IL), the Helen Keller Eye Research Foundation (Birmingham, AL), the South Africa Retinitis Pigmentosa Foundation (Johannesburg, South Africa), and is Co-Chairman of the Medical and Scientific Advisory Board of Retina International (Zurich, Switzerland).