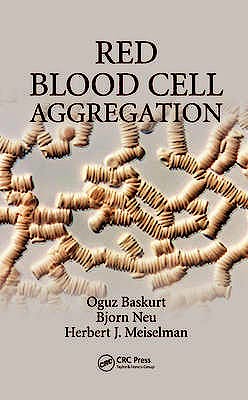 Red blood cells in humans—and most other mammals—have a tendency to form aggregates with a characteristic face-to-face morphology, similar to a stack of coins. Known as rouleaux, these aggregates are a normally occurring phenomenon and have a major impact on blood rheology. What is the underlying mechanism that produces this pattern? Does this really happen in blood circulation? And do these rouleaux formations have a useful function?

The first book to offer a comprehensive review of the subject, Red Blood Cell Aggregation tackles these and other questions related to red blood cell (RBC) aggregates. The book covers basic, clinical, and physiological aspects of this important biophysical phenomenon and integrates these areas with concepts in bioengineering. It brings together state-of-the-art research on the determinants, mechanisms, and measurement and effects of RBC aggregation as well as on variations and comparative aspects.

After an introductory overview, the book outlines factors and conditions that affect RBC aggregation. It presents the two hypotheses—the bridging model and the depletion model—that provide potential mechanisms for the adhesive forces that lead to the regular packing of the cells in rouleaux formations. The book also reviews the methods used to quantify RBC aggregation in vitro, focusing on their importance in clinical practice. Chapters discuss the effect of RBC aggregation on the in vitro rheology of blood as well as on tube flow.

The book also looks at what happens in the circulation when red blood cells aggregate and examines variations due to physiological and pathophysiological challenges. The concluding chapter explores the formation of red blood cell aggregates in other mammals. Written by leading researchers in the field, this is an invaluable resource for basic science, medical, and clinical researchers; graduate students; and clinicians interested in mammalian red blood cells.

Oguz Baskurt is a Professor of physiology at Koc University School of Medicine, Istanbul Turkey. His research is focused on the role of hemorheological factors in in vivo flow dynamics of blood, and he has conducted research on the mechanisms of red blood cell aggregation and hemorheological instrumentation. His scientific interest also includes comparative aspects of circulatory physiology and hemorheology in a wide variety of mammalian species. He has published more than 150 peer-reviewed papers and is among the editors of Handbook of Hemorheology and Hemodynamics (IOS Press, 2007) and the international journal Clinical Hemorheology and Microcirculation. He served as the president of The International Society of Clinical Hemorheology for two terms between 1999 and 2005.

Björn Neu is a Professor of Bioengineering at the Nanyang Technological University in Singapore. He received his Doctorate in Biophysics in 1999 at the Humboldt University in Berlin and did post-doctoral research in the area of hemorheology at the Keck School of Medicine, University of Southern California in Los Angeles. His research interests include cell interactions, polymers at bio-interfaces and the rheological behavior of blood.

Herbert J. Meiselman is Professor and Vice-Chair of Physiology and Biophysics at the Keck School of Medicine, University of Southern California, where he conducts research in the field of blood rheology in health and disease, including comparative studies of various mammalian species. He is among the editors of the Handbook of Hemorheology and Hemodynamics (IOS Press, 2007) and the international journals Biorheology and Clinical Hemorheology and Microcirculation. He has published more than 250 peer-reviewed papers, has received the Fåhraeus Award and the Poiseuille Gold Medal, and is currently President of the International Society for Clinical Hemorheology.