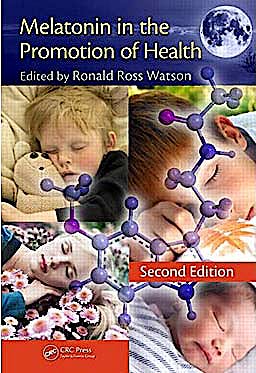 Melatonin in the Promotion of Health

This new edition presents information on how melatonin is synthesized and produced in the body as well as how this hormone affects several diseases. The book heavily focuses on prevention as well as treatment of various human disease states including behavior disorders, mental disorders, breast cancer, bone health, and gastrointestinal diseases. It covers the role of melatonin in the prevention of oxidative stress, mutagenesis, sun damage, ocular health, gut motility, and detoxification. It also presents mechanisms of melatonin action in humans including cell modulation, signaling mechanisms, protective effects, and melatonin receptors as well as its role as an antioxidant.

OVERVIEWS OF KEY MELATONIN MODIFIED CONDITIONS
Melatonin and treatment of non-sleep disorders and diseases in humans: A historical Overview; Reiter
Melatonin and circadian rhythms: An overview; Verster
Melatonin and neuroendocrine disorders of circadian function; Willis
Melatonin: History of from discovery to present with delineation of functions in humans; Chowdhury and Sengupta
Melatonin and traumatic stress; Bob
Melatonin: Changes with age and role in aging; Karasek
Melatonin as an antioxidant; Berra
Synthesis and metabolism of melatonin in the skin and retina; Slominski

Professor Ronald Ross Watson has done studies of melatonin in models of mouse AIDS, immune dysfunction, and aging. He was Director of the National Institutes of Health funded Alcohol Research Center for 5 years. He is an internationally recognized alcohol researcher, nutritionist and immunologist. He also initiated and directed other NIH-associated work at The University of Arizona, College of Medicine.