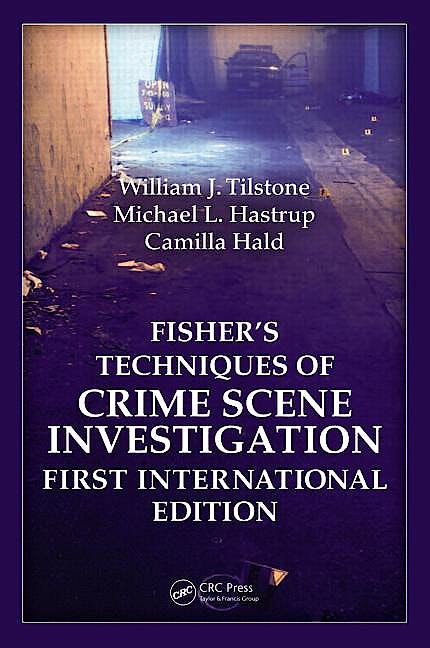 Barry Fisher’s Techniques of Crime Scene Investigation has long been considered the "bible" of the crime-solving profession, drawing from the author’s 40-year career in forensic science, including his time spent as the crime laboratory director for the Los Angeles County Sheriff’s Department. Now for the first time, commissioned authors working out of the United Kingdom and Denmark present Fisher’s Techniques of Crime Scene Investigation First International Edition—the latest edition of a classic volume, now oriented specifically to an international audience.

Maintaining the same format as the U.S. editions, the book focuses on international procedures, laws, and cases. The book’s three-part structure highlights the importance of approaching the topic from three consecutive perspectives. The first is that crime scene investigation is a subdiscipline of forensic science, and thus the first section, entirely new to this edition, explores the forensic process and the basic principles and practices of crime scene investigation.

The second perspective is that crime scene investigation is about identifying and recovering different forms of evidence, each with its own methods for identification, recovery, and analysis. To that end, the book discusses trace and impression evidence, establishing personal identity, forensic biology, and evidence associated with firearms, arson, and explosions.

Lastly, crime scene investigation is ultimately about describing the location, modus operandi, time frame and sequence of events, identity of persons involved, and motive for different types of crime. Highlighting this focus, the final section presents chapters on the investigation of various crime scenarios, including those involving illicit drugs, sexual assault, burglary, motor vehicles, and homicide. The book closes with new appendices exploring the cutting-edge world of digital evidence.

Enhanced with hundreds of diagrams and color photos of actual crime scenes, this volume combines time-tested procedures with an international scope to provide an essential resource for investigators in Europe, Australasia, and Canada charged with solving crimes and bringing offenders to justice.

THE FORENSIC PROCESS, PRINCIPLES, AND PRACTICE

FORMS OF EVIDENCE, IDENTIFICATION, AND RECOVERY

SCENE INVESTIGATION AND TYPE OF CRIME

William (Bill) Tilstone has a B.Sc. and a Ph.D. from the University of Glasgow. He spent seven years as a lecturer in the University’s Department of Pathological Biochemistry, where his research on drug kinetics in overdose and on the biochemistry of the body’s responses to major trauma led to his introduction to forensic science. He was a lecturer in forensic science at the University of Strathclyde, also in Glasgow, where he worked for 12 years and served as a professor and head of the Forensic Science Unit for six years. While at Strathclyde, he was actively involved in casework, mainly in forensic biology for the public prosecutor and in toxicology for the defence. Bill left his academic position to become the first director of the newly established Forensic Science Centre in South Australia, a position he held until 1996, when he accepted the position of Executive Director of the National Forensic Science Technology Center (NFSTC), in Florida. This history has given him a unique blend of experiences in forensic science, including practical casework, teaching, and research, as well as executive management in academia, government, and private business, covering three different countries. He has contributed more than 100 papers and reviews to the literature and two books in addition to the present work. After retiring from the NFSTC in 2007, he continues to serve as the quality manager and assessor for an American forensic accrediting body and has also maintained his academic links in Scotland.

Michael Hastrup began his investigation career in 1984 when he was employed as a police officer with the Danish National Police. This was followed by employment as a detective inspector before joining the National Centre of Forensic Services after nine years of service. He worked as a fingerprint examiner before moving to the Scene of Crime Section in Copenhagen, where he began his career as a crime scene investigator which continued until 2010. He now works in the Quality Management Section within the National Centre of Forensic Services. Michael represents Denmark within the European Network of Forensic Science Institutes (ENFSI), where he has been an active member of the Scene of Crime Working Group since 2005 and a member of its Steering Group since 2008. He also represents the Danish National Police in the ENFSI Quality and Competence Liaison Group (QCLG). He is the European CSI representative within the International Laboratory Accreditation Cooperation (ILAC) Working Group 10, tasked with producing a globally applicable guideline for implementation of accreditation standards in the field of crime scene examination.

Camilla Hald received a M.Sc. in social anthropology and subsidiary studies in rhetorics from the University of Copenhagen in 2002 and received her Ph.D. in anthropology from the University of Aarhus in 2011. Her dissertation was entitled "Web without a Weaver: On the Becoming of Knowledge. A Study of Criminal Investigation in the Danish Police." Camilla has acted as a consultant for the Danish National Police and has taught criminology at the Danish Police College since 2000. She has held a tenured position with the Danish National Police Knowledge and Research Centre since 2007 and is currently employed as chief advisor in the Research and Development Unit. She is currently working primarily on epistemological and methodological issues related to crime investigation, scene investigation in particular, and is actively involved in the development of police science as a distinct discipline in Denmark and Europe. She is a member of the European Police College (CEPOL) Research and Science Working Group, an expert group tasked with promoting the use and development of research and science in police practice and education within the European Union.