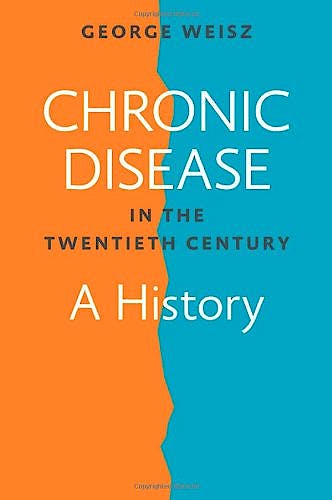 Chronic Disease in the Twentieth Century. a History (Hardcover)

Long and recurring illnesses have burdened sick people and their doctors since ancient times, but until recently the concept of "chronic disease" had limited significance. Even lingering diseases like tuberculosis, a leading cause of mortality, did not inspire dedicated public health activities until the later decades of the nineteenth century, when it became understood as a treatable infectious disease. Historian of medicine George Weisz analyzes why the idea of chronic disease assumed critical importance in the twentieth century and how it acquired new meaning as one of the most serious problems facing national healthcare systems.

Chronic Disease in the Twentieth Century challenges the conventional wisdom that the concept of chronic disease emerged because medicine’s ability to cure infectious disease led to changing patterns of disease. Instead, it suggests, the concept was constructed and has evolved to serve a variety of political and social purposes. How and why the concept developed differently in the United States, the United Kingdom, and France are central concerns of this work. In the United States, anxiety about chronic disease spread early in the twentieth century and was transformed in the 1950s and 1960s into a national crisis that helped shape healthcare reform. In the United Kingdom, the concept emerged only after World War II, was associated almost exclusively with proper medical care for the elderly population, and became closely linked to the development of geriatrics as a specialty. In France, the problems of elderly and infirm people were handled as technical and administrative matters until the 1950s and 1960s, when medical treatment of elderly people emerged as a subset of their wider social marginality.

While an international consensus now exists regarding a chronic disease crisis that demands better forms of disease management, the different paths taken by these countries during the twentieth century continue to exert profound influence. This book seeks to explain why, among the innumerable problems faced by societies, some problems in some places become viewed as critical public issues that shape health policy.

George Weisz is a professor of social studies and medicine and Cotton-Hannah Chair for the History of Medicine at McGill University in Quebec. He is author and editor of several books, including Divide and Conquer: A Comparative History of Medical Specialization, and co-editor of Greater than the Parts: Holism in Biomedicine, 1920-1950 and Body Counts: Medical Quantification in Historical and Sociological Perspectives.