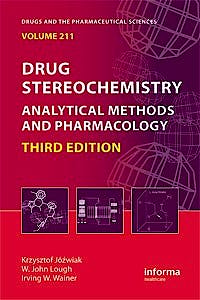 This revised third edition has been updated to cover all aspects of chiral drugs from the academic, governmental industrial and clinical perspective reflecting the many advances in techniques and methodology. The title will cover new material including the use of enzymes for the synthesis and resolution of enantiomeric compounds as well, as their use in drug discovery; how stereochemistry impacts on decisions taken during the ADMET (absorption, distribution, metabolism, excretion, toxicity) stage of drug discovery; issues faced during the final stages of the drug development process; the impact of ICH (International Conference on Harmonisation) on the use of single isomer drugs; racemic switches; and legal perspectives looking at IP and patent issues surrounding racemic switches and marketing single enantiomer switches.

This Third Edition comprehensively presents all aspects of chiral drugs from scientific, academic, governmental, industrial, and clinical points of view. This one-stop text covers the lifespan of stereochemistry, from its early history, including an overview of terms and concepts, to the current drug development process, legal and regulatory issues, and the new stereoisomeric drugs.

This will be a one-stop shop for pharmaceutical scientists and chemists working with chiral drug molecules.

II. The Separation, Preparation and Identification of Stereochemically Pure Drugs

IV. Perspectives on the Development and Use of Single Isomer Drugs

Professor Krzysztof Józwiak is Head of Laboratory of Medicinal Chemistry and Neuroengineering of Medical University of Lublin, Lublin, Poland. Following graduation in 2000 he was a postdoctoral fellow in the Gerontology Research Center, National Institute on Aging/ NIH in Baltimore, MD under the supervision of Irving W. Wainer; and in 2004 assumed Associate Professor position at the Medical University of Lublin. Prof. Jozwiak’s main research interests focus on elucidation of molecular mechanisms of interactions between medicinal molecules and their protein targets, development of new methods for both experimental and theoretical characterization of drug-receptor interactions and their applications in medicinal chemistry projects. Topics of particular interest are molecular modeling of chiral substances and mechanisms of chiral recognition of molecules on protein selectors.

Dr W John Lough is Reader in Pharmaceutical Analysis in the Department of Pharmacy, Health and Well-Being at the University of Sunderland, UK. From an ICI-sponsored PhD, over seven years spent with Beecham Pharmaceuticals, to pharmaceutical collaborations during his time in academia, Dr Lough’s research interests have always been orientated towards industrial applications. In the general area of pharmaceutical and biomedical analysis this has included a varied range of funded studies including; the exploitation of achiral derivatisation in chiral separations; studies in low dispersion chromatography; use of on-column sample focusing in drug bioanalysis; chiral drug bioanalysis; biomedical applications of capillary electrophoresis; pharmaceutical applications of capillary electrochromatography; and the evaluation and exploitation of orthogonal stationary phase selectivity in liquid chromatography.

Dr Lough has published extensively, including editing Chiral Liquid Chromatography, and co-editing three other texts. He has been a member of the Executive Committee of The Chromatographic Society for the past 20 years (serving as President from 2007-2009), and of the British Pharmacopoeia, Group of Experts A (Medicinal Chemicals) for over ten years. He chaired the International Symposium on Chiral Discrimination in Edinburgh in 1996 and since then has served on the committees of several international symposia, currently as the Secretary of the Permanent Scientific Committee of the International Symposium on Chromatography. Dr Lough was involved in the founding journal Chromatography Today, for which he is currently a Contributing Editor.

Irving W. Wainer, Ph.D. is Senior Investigator, in the Bioanalytical Chemistry and Drug Discovery Section, Laboratory for Clinical Investigation, National Institute of Aging/National Institutes of Health. Dr. Wainer received his B.S. in chemistry from Wayne State University, and then received his Ph.D. in chemistry from Cornell University. After conducting postdoctoral doctoral studies in molecular biology at the University of Oregon and clinical pharmacology at Thomas Jefferson Medical School he worked for the Food and Drug Administration (FDA) as a Research Chemist. Subsequent posts were Director of Analytical Chemistry, Clinical Pharmacokinetics Lab, and Associate Member, Pharmaceutical Division, St. Jude Children's Research Hospital in Memphis; Professor and Head of the Pharmacokinetics Laboratory, Department of Oncology, McGill University – and remains an Adjunct Professor at McGill; Professor of Pharmacology, Georgetown University Washington, D.C.

Dr Wainer has published over 350 scientific papers and eight books. He was founding editor of the journal Chirality and Senior Editor of the Journal of Chromatography B: Biomedical Sciences and Applications for 11 years. His awards include; the "Harry Gold Award" (co-recipient with Dr. John E. Stambaugh) from the American College of Clinical Pharmacologists; "Sigma Xi Science Award", FDA Sigma Xi Club; and "A.J.P. Martin Medal" presented by the Chromatographic Society for contributions to the development of chromatographic science. Dr Wainer is an Elected Fellow of the American Academy of Pharmaceutical Sciences; Elected Member United States Pharmacopeial Convention Committee of Revision for 1995-2000. In June 2006 he was awarded an honorary Doctorate in Medicine from the Medical University of Gdansk, Poland. His research interests include clinical pharmacology, bioanalytical chemistry, the development of on-line high throughput screens, and drug discovery in the areas of oncology, neuropharmacology and cardiovascular disease.