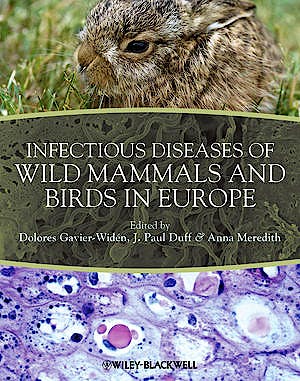 Infectious Diseases of Wild Mammals and Birds in Europe

Infectious Diseases of Wild Mammals and Birds in Europe is a key resource on the diagnosis and treatment of infectious diseases in European wildlife that covers the distinctive nature of diseases as they occur in Europe, including strains, insect vectors, reservoir species, and climate, as well as geographical distribution of the diseases and European regulations for reporting, diagnosis and control. Divided into sections on viral infections, bacterial infections, fungal and yeast infections, and prion infections, this definitive reference provides valuable information on disease classification and properties, causative agents, epidemiology, pathogenesis, and implications for human, domestic and wild animal health.

Dolores Gavier-Widén, DVM, MS, PhD, Associate Professor at the Swedish University of Agricultural Sciences, Deputy Head of Department of Pathology and Wildlife Diseases, National Veterinary Institute (SVA), Uppsala, Sweden. Dolores is the president of the Wildlife Disease Association (WDA) (2012-2013) and past-president (2006-2008) of the European Section of WDA (EWDA). She is reviewer for many journals, and has written book chapters and many scientific papers. Dolores has worked on wildlife disease research internationally, in particular on tuberculosis, calicivirus infection of leporids, prion diseases, and on the ongoing EU project "Novel technologies for surveillance of emerging and re-emerging infections of wildlife". She is consultant for EFSA, EC, research agencies and veterinary and public health organisations. She has worked on wildlife pathology and diagnostics of infectious diseases of free-ranging and farmed wild mammals and birds for more than 20 years.

J. Paul Duff, BSc (zool), MVB, MSc, MRCVS, is based at AHVLA, Penrith, Cumbria, UK. Paul is the past-president of the EWDA (2009-2010) and a past Council member of the British Veterinary Zoological Society. He is a veterinary surgeon and zoologist who has worked for more than 20 years investigating disease in wild animals, exotic animals and livestock. Since 1998, he has been the project leader for the AHVLA Diseases of Wildlife Scheme (AHVLADoWS). This is the first government funded scheme for the investigation and surveillance of wildlife diseases in England and Wales. Since 1995, editor of the OIE Annual Report, ‘Wildlife Diseases in the UK' which officially summarises wildlife disease reported in the UK each year for the Office International d'Epizooties (the World Animal Health Association). He is project leader, with Dolores Gavier-Widén, for the EU sponsored ‘Wildlife related emerging diseases and zoonoses', Special Interest Group.

Anna Meredith MA VetMB PhD CertLAS DZooMed MRCVS, RCVS Recognised Specialist in Zoo and Wildlife Medicine, Head of Exotic Animal and Wildlife Service, Royal (Dick) School of Veterinary Studies, University of Edinburgh, Hospital for Small Animals, UK. Anna has extensive publication and book editing experience in the exotic animal and wildlife field, as well as being actively involved in many areas of ongoing wildlife research, including red squirrel and osprey surveillance in Scotland, and is currently carrying out full time DEFRA- funded research into emerging diseases in UK wildlife. She is a past president of the British Veterinary Zoological Society and a member of EWDA and EAZWV. She teaches wildlife medicine to veterinarians at both undergraduate and postgraduate level.