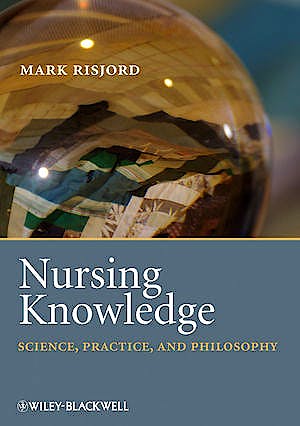 éticaenfermería ética y legislaciónhistoria de la enfermeríasociologíaantropologíafundamentosenfermería planes de cuidadosdiagnósticosenfermería criterios de clasificación
Nurses who conduct research have a longstanding interest in questions of nursing knowledge. Nursing Knowledge is a clear and well-informed exposition of the philosophical background to nursing theory and research.   Nursing Knowledge answers such fundamental questions as: How is nursing theory related to nursing practice?  What are the core elements of nursing knowledge? What makes nursing research distinctive as nursing research?  It examines the history of the philosophical debates within nursing, critiques the arguments, explains the implications and sets out to rethink the philosophical foundation of nursing science.

Nursing Knowledge begins with philosophical problems that arise within nursing science.  It then considers various solutions with the help of philosophical ideas arguingargues that nurses ought to adopt certain philosophical positions because they are the best solutions to the problems that nurses encounter. The book argues claims that the nursing standpoint has the potential to disclose a more complete understanding of human health than the common disease-and-dysfunction views. Because of the relationship to practice, nursing science may freely draw theory from other disciplines and nursing practice unifies nursing research. By redefining theory and philosophy,With a new philosophical perspective on nursing science, the so-called relevance gap between nursing theory and practice can be closed.

The final chapter of the book ‘redraws the map’, to create a new picture of nursing science based on the following principles:

Dr. Mark Risjord is Associate Professor in Philosophy at Emory University, and has a faculty appointment in the Nell Hodgson Woodruff School of Nursing. His main research areas have been in the philosophy of social science and the philosophy of medicine.  He was invited to has been teaching philosophy of science and theory development in the new PhD program in the Nell Hodgson School of Nursing at Emory University insince 1999.  He has been awarded two competitive teaching prizes: Emory Williams Distinguished Teaching Award (2004) and the Excellence in Teaching Award (1997).  He is presently serving as the Masse-Martin/NEH Distinguished Teaching Chair (2006-2010).

PART I NURSING KNOWLEDGE AND THE CHALLENGE OF RELEVANCE.

Introduction to Part I.

1 Prehistory of the problem.

The domain of nursing.

Professionalization and the translation gap.

A philosophy of nursing.

The demise of practice theory.

The argument from value freedom.

The argument from theory structure.

Donaldson and Crowley on the discipline.

Fawcett on the levels of theory.

3 Toward a philosophy of nursing science.

Questions about the discipline.

Science, value, and the nursing standpoint.

The received view of theory.

4 Practice values and the disciplinary knowledge base.

Challenges to Dickoff and James’ criteria.

The disintegration of nursing knowledge.

The obfuscation of evaluative commitments.

The role of theory in ethical knowledge.

The Johnson model: nursing values as guides for theory.

Knowledge and the division of labor in health care.

Top-down and bottom-up views of nursing.

Values in the nursing standpoint.

What is the nursing role?

How are the boundaries of the profession determined?

Is nursing an applied science?

PART III NURSING THEORY AND THE PHILOSOPHY OF SCIENCE.

Some history and terminology.

Conceptions of theory in nursing.

Challenges to an axiomatic treatment of theory.

The hierarchy of theory.

Positivism and the critique of nursing metatheory.

The metaparadigm of nursing.

Validity of the metaparadigm.

What is a “metaparadigm”?

How the levels are distinguished.

How the levels are related.

Why the levels are supposed to be necessary.

Conclusion: the relevance gap and the philosophy of science.

The necessity of auxiliary hypotheses.

Failure of the theory–observation distinction.

The vagueness of the distinction.

The role of training.

Levels of theory and interdisciplinary research.

PART IV THE IDEA OF A NURSING SCIENCE.

Sensory and distress components of pain.

12 The structure of theory.

Borrowed theory and the nursing standpoint.

What is middle-range theory?

The semantic conception and the received view.

The challenge of precision in nursing models.

Holism, reductionism, and the nursing standpoint.

The causation and control argument.

The priority of theory.

15 Conceptual models and the fate of grand theory.

The orientation and abstraction pictures.

Arguments against the abstraction picture.

Harmful effects of the abstraction picture.

Advantages of the orientation picture.

Models of nursing and models for nursing.

16 The rise of qualitative research.

Components of a paradigm.

The unity of nursing knowledge.

Method in the middle.

A new perspective on theory.

Nursing knowledge and the relevance gap.