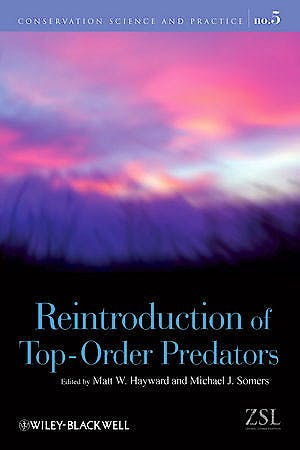 Large predators are among the most threatened species on the planet and ways of conserving them in the face of increasing human populations and associated resource requirements are becoming critical. This book draws upon the experiences of some of the world’s foremost large carnivore specialists to discuss the numerous issues associated reintroducing large predators back into their natural habitats. Reviews of internationally renowned reintroduction programs for wolves, European lynx and African wild dog reveal the successes and failures of these actions. Experts on tigers, snow leopards and jaguars contend that there are other conservation options of higher priority that will ensure their security in the long-term. Other experts discuss more theoretical aspects such as whether we know enough about these species to be able to predict their behavioural or ecological response to the reintroduction process. Social, economic, political and genetic considerations are also addressed.

1. Reintroduction of Top-order Predators: Using Science to restore one of the drivers of biodiversity Matt W. Hayward & Michael J. Somers .

9. The Suitability of the Jaguar (Panthera onca) for Reintroduction (what we know, what we need to know) Marcella J. Kelly & Scott Silver.

10. The status and conservation of leopards and other large carnivores in the Congo Basin, and the potential role of reintroduction Philipp Henschel.

15. A synthesis of early indicators of the drivers of predator conservation on private lands in South Africa P.A. Lindsey, S. Romañach & H. Davies-Mostert.

16. Moving beyond the descriptive: predicting the responses of top-order predators to reintroduction Matt W. Hayward.

Matt Hayward conducted a PhD on the conservation ecology of the Australian marsupial quokka, then studied bushmeat hunting in the Transkei region of South Africa and the reintroduction of large predators to Addo Elephant National Park. He is currently researching Holarctic predator dietary ecology, forest regeneration and European bison conservation in Bialowieza Primeval Forest, Poland.

Michael Somers is a lecturer at the Centre for Wildlife Management and a core team member of the NRF-DST Centre of Excellence for Invasion Biology at the University of Pretoria. His research interests are broad but mostly include reintroduction biology and invasion ecology.