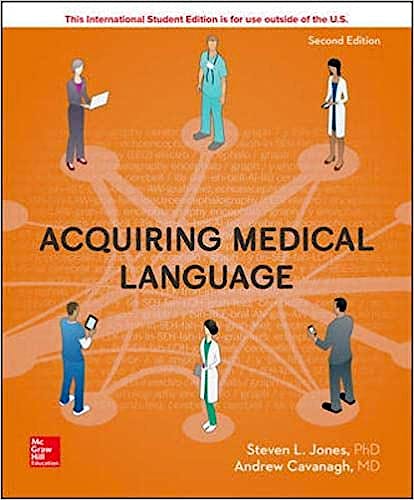 Preface
1 Introduction to Medical Language
2 Introduction to Health Records
3 The Integumentary System—Dermatology
4 The Musculoskeletal System—Orthopedics
5 The Nervous System—Neurology and Psychiatry
6 The Sensory System—Ophthalmology and Otolaryngology
7 The Endocrine System—Endocrinology
8 The Blood and Lymphatic Systems—Hematology and Immunology
9 The Cardiovascular System—Cardiology
10 The Respiratory System—Pulmonology
11 The Gastrointestinal System—Gastroenterology
12 The Urinary and Male Reproductive Systems—Urology
13 The Female Reproductive System—Gynecology, Obstetrics, and Neonatology
Appendixes
Appendix A Prefixes
Appendix B Suffixes
Appendix C Roots Only Mentioned in Word Analysis
Glossary
Index

Steven L. Jones holds a B.A. in Greek and Latin from Baylor University; an M.A. in Greek, Latin, and classical studies from Bryn Mawr College, and a Ph.D. in classics from the University of Texas at Austin. Dr. Jones has held previous faculty appointments at Trinity University, the University of Texas at Austin, and Baylor University. Currently, he teaches medical terminology at Rice University in Houston, Texas. He is also assistant professor of classics at Houston Baptist University, where he serves as chair of the Department of Classics and Biblical Languages and as director of the Master of Arts in Biblical Languages Program. He teaches courses in Latin, Greek, classical civilization, early Christianity, and the classical roots of medical language.

Andrew Cavanagh holds a B.S. in genetics from Texas A&M University and an M.D. from Texas A&M College of Medicine. After completing his residency at Palmetto Health Children's Hospital, he joined the pediatric practice of the Austin Regional Clinic. In addition to being board certified in pediatrics, Dr. Cavanagh has served as the pediatric specialty chief for Dell Children's Medical Center and on the board of Dell Children's Medical Center Executive Committee. He is currently clinical assistant professor of pediatrics at the Texas A&M College of Medicine.