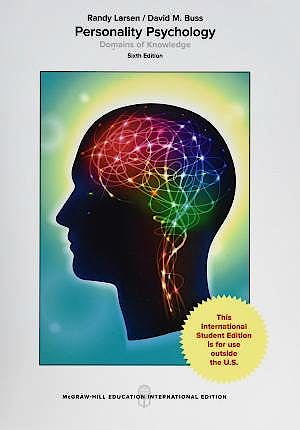 In this 6th edition of Personality Psychology: Domains of Knowledge About Human Nature, Randy Larsen and David Buss dynamically demonstrate how scientists approach the study of personality. Major findings, both classical and contemporary, are presented in the context of six key domains-Dispositional, Biological, Intrapsychic, Cognitive/Experimental, Social and Cultural, and Adjustment-providing a foundation for the analysis and understanding of human personality. The Connect course for this offering includes SmartBook, an adaptive reading and study experience which guides students to master, recall, and apply key concepts while providing automatically-graded assessments.

McGraw-Hill Connect (R) is a subscription-based learning service accessible online through your personal computer or tablet. Choose this option if your instructor will require Connect to be used in the course. Your subscription to Connect includes the following:

David M. Buss received his PhD in 1981 from the University of California at Berkeley. He served on the faculties of Harvard University and the University of Michigan before accepting a professorship at the University of Texas at Austin, where he has taught since 1996. Buss received the American Psychological Association (APA) DistinguishedScientific Award for Early Career Contribution to Psychology in 1988, the APA G. Stanley Hall Award in 1990, and the APA Distinguished Scientist Lecturer Award in 2001. Books by David Buss include The Evolution of Desire: Strategies of Human Mating (Revised Edition) (Basic Books, 2003), which has been translated into 10 languages;Evolutionary Psychology: The New Science of the Mind (4th ed.) (Allyn & Bacon, 2012), which was presented with the Robert W. Hamilton Book Award; The Dangerous Passion: Why Jealousy Is as Necessary as Love and Sex (Free Press,2000), which has been translated into 13 languages; and The Handbook of Evolutionary Psychology (Wiley, 2005). Buss has authored more than 250 scientifi c publications and has also written articles for The New York Times and the Times Higher Education Supplement. He appears in the ISI List of Most Highly Cited Psychologists Worldwide, and as the 27th Most Cited Psychologist in Introductory Psychology textbooks. He lectures widely throughout the United States and abroad and has extensive crosscultural research collaborations. David Buss greatly enjoys teaching, and in 2001 he won the Presidents Teaching Excellence Award at the University of Texas.