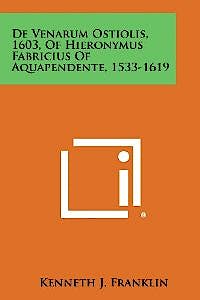 An important early work by Fabricius has now been published by the History of Science Society with the aid of funds contributed by the Carnegie Corporation. All English readers who would fully understand the discovery of the circulation of the blood must, after studying the immortal “De motu Cordis”, refer to the work of Harvey’s precursor and teacher, Fabricius of Aquapendente, “De Venarum Ostiolis”, and to that of his successor R. Lower, “De Corde”. By his scholarly translations of both of these works, Dr. Franklin has now completed the early trilogy of the circulation-complete in facsimile and translation and with all the original plates. Discovery and publication were too often divided by long years. The first unintelligent glimpses of valves by Canano 1541, Estienne 1545, Sylvius 1541 and Colombo seem to have been unknown to Fabricius in 1574 when he first made his discovery, and another twenty-nine years elapsed before he published it. The salient points in his life are well indicated, and the construction of the anatomy theatre at Padua, where he lectured, is illustrated with architectural plans for the first time. The eight fine full-page engravings of the original have been well reproduced, but we regret that the folding plate, pages 10 and 11, was not mounted clear of the stitching.