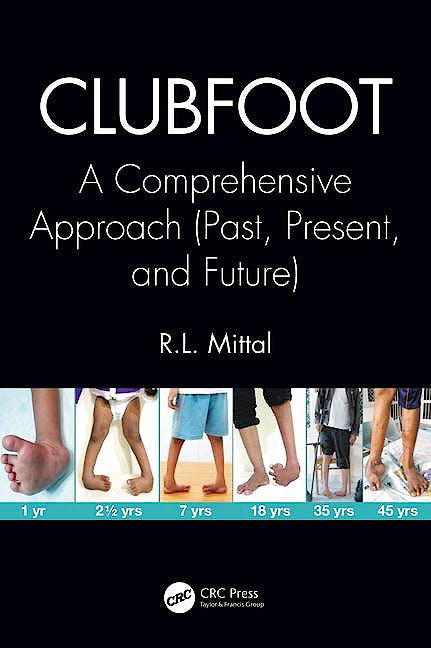 Clubfoot. A Comprehensive Approach (Past, Present, and Future)

Clubfoot is a common deformity but remains unsolved. Detailed epidemiology has been described to assess the socio-economic impact. All corrective methods are enumerated, highlighting their efficacy and pitfalls. The importance of each clubfoot case being different and the means of dealing it is emphasized upon. This is a comprehensive book on Clubfoot with the types and their mode of treatment extensively discussed. Also, Clubfoot differences during birth, additional birth defects, weight bearing effect with age, previous scars, trauma and other complications are covered.

Prof. R.L. Mittal Formerly Professor & Head orthopaedic department, Principal Government Medical college Patiala, Dean Punjabi University Patiala (Punjab) INDIA as well as DIRECTOR Research & Medical Education Government of Punjab, Chandigarh INDIA. Author has also been an Alumnus of this institution. Retired on 30th April 1995 from Government Job, still actively involved in teaching & academic activities in various capacities, the latest being as EMERITUS PROFESSOR in Orthopaedic Department of Government Medical College Patiala, his old department. He is presently a practicing orthopaedic surgeon at 97 New Lal Bagh Colony, Patiala (Punjab) 147001, INDIA, but very considerate to poor patients. The author has been Chancellor’s Nominee in the Punjabi University Patiala committee for selection of teachers and also a teacher for M.sc & B.sc Physiotherapy courses in this university. He has also been a teacher for sports medicine courses at Government of India National Institute of Sports, Patiala.

He has been a devout researcher in diverse areas with a large number of well documented works. His special field of lifetime interest has been CLUBFOOT. He innovated newer concepts in pathoanatomy & surgical techniques in extreme clubfoot deformities, which are prevalent from early childhood to adults especially in LMICs including India, winning numerous National & International Awards & Rewards. This has been a ZERO cost Research initiated at Government Medical College/ Rajindra Hospital Patiala since about half a century and still continuing.

Due to his expertise, H was authorised by Punjab Government Under GOI’s National Health Mission (Rashtriya Bal Swasthya Karyakram), at Govt. Mata Kaushlaya Hospital Patiala for free clubfoot surgeries for the underprivileged patients of Punjab He performed a record 38 surgeries in about a year in 2016-17. He also contributed 12 poor free surgeries, single handed, on 4th August 2016, the National Bone and Joint Day, to the kitty of Indian Orthopaedic association for creating a world record of maximum free surgeries by any country with the WORLD RECORDS ACADEMY, U.S.A.