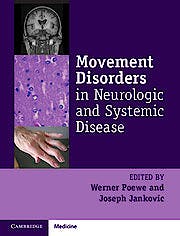 Movement disorders - ranging from parkinsonism to a variety of hyperkinetic disorders, such as tremors, dystonic, chorea and myoclonus - can be the presenting or a prominent clinical feature in a broad spectrum of systemic conditions such as endocrine and metabolic disorders, autoimmune diseases, infections, intoxications, tumors and pareneoplastic syndromes, stroke and multiple sclerosis. The resulting clinical scenarios can be confusing and difficult to interpret by internists, generalists and neurologists. Movement Disorders in Neurologic and Systemic Disease provides comprehensive coverage of most common movement disorders seen in systemic and general neurologic disease, as well as differential diagnostic and therapeutic algorithms. The chapters are written by internationally recognized experts and more than 50 illustrative videos highlight the phenomenology of some of the movement disorders and provide a useful 'bed-side' diagnostic tool. This book is a valuable resource for neurologists, physiatrists, psychiatrists, internists, primary care physicians and trainees in medicine and neurology.