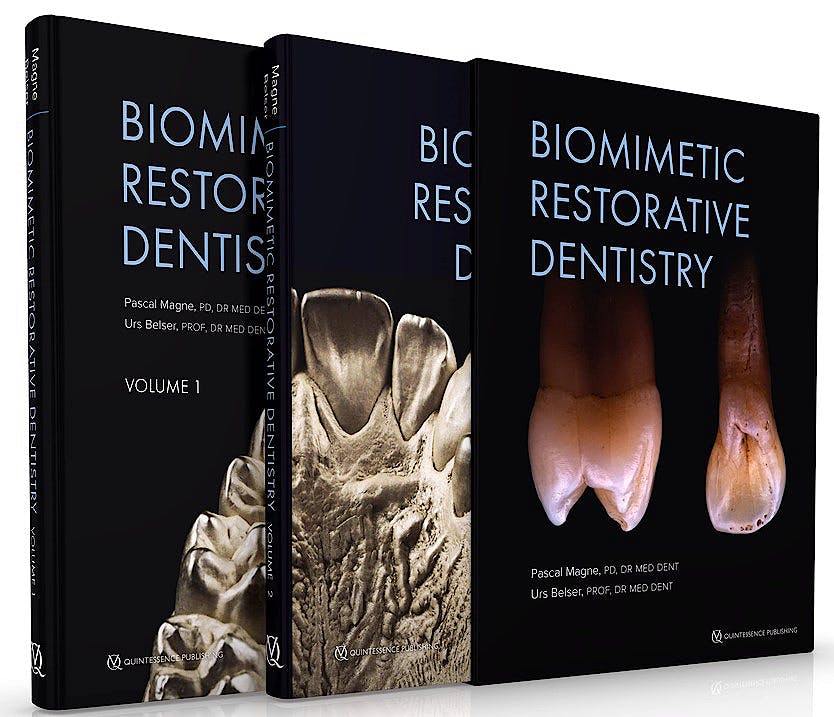 The first edition of this book took the dental world by storm in 2002 and became one of the bestselling Quintessence books of all time, and this edition will no doubt do the same. It takes the science of esthetic dental reconstruction to a new level both clinically and academically, and it offers all that a clinician could wish for in terms of indications and the classic clinical steps for tooth preparation, laboratory and CAD/CAM procedures, adhesive luting procedures, and maintenance. But above all, what makes this book so unique is the underlying principle that Pascal Magne lives by: respect the natural structure and use that nature as your guide in restoration. The central philosophy of the book is the biomimetic principle—that is, the idea that the intact tooth in its ideal hues and shades, and perhaps more importantly in its intracoronal anatomy and location in the arch, is the guide to reconstruction and the determinant for success. Restoring or mimicking the biomechanical, structural, and esthetic integrity of teeth is paramount.

Therefore, the objective of this book is to propose new criteria for esthetic restorative dentistry based on biomimetics. The driving forces of restorative dentistry are maintenance of tooth vitality and maximum conservation of intact hard tissues, and as such the book offers ultraconservative treatment options that can precede a more sophisticated treatment. The core of the book centers of the application of the biomimetic principle in the form of bonded restorations using composite resins and ceramics. The broad spectrum of indications of bonded restorations is described, followed by detailed instruction on the treatment planning and diagnostic approach, which is the first step for every case. The treatment is then described step by step, including tooth preparation and impression, laboratory and CAD/CAM procedures related to the fabrication of composite resin and ceramic workpieces, and their final insertion through adhesive luting procedures. Volume 1 covers the fundamentals and basic procedures, and Volume 2 focuses on advanced clinical techniques, maintenance, and repair of bonded restorations. QR codes throughout link to demonstrations of the techniques and dramatic videos highlighting the artistry of biomimetics. Written by a true master and true artist, this book will undoubtedly inspire excellence in anyone who picks it up.

What is new in this edition?
The existing content has been significantly updated, with over 500 pages of new content added together with almost 100 video clips accessible via QR code. Major additions include detailed aspects of morphology tooth by tooth (including didactic drawing exercises), significant updates in the famous Magne/Belser esthetic checklist, diagnostic approaches and full-mouth cases with enhanced mock-up techniques, immediate dentin sealing and margin elevation, semi-(in)direct techniques in both anterior and posterior teeth (including CAD/CAM approaches), a new classification of anterior bonded porcelain restorations, and of course updated protocols, especially for tooth preparation and provisionalization. Tables and step-by-step procedures are presented throughout the book for all the essential procedures, both clinical and laboratory. A bonus chapter chronicling the life and motivation of Pascal Magne brings it all together.

Dr Pascal Magne is an Associate Professor with tenure and the Don and Sybil Harrington Foundation Professor of Esthetic Dentistry in the Division of Restorative Sciences at the University of Southern California Herman Ostrow School of Dentistry in Los Angeles. He graduated from the University of Geneva Dental School in Switzerland in 1989 with a Med Dent degree and later obtained his doctorate in 1992 and his Privat Docent degree in 2002. Dr Magne received postgraduate training in fixed prosthodontics and occlusion, operative dentistry, and endodontics and was a lecturer at the same university beginning in 1989 until 1997. From 1997 to 1999, he was a Visiting Associate Professor at the Minnesota Dental Research Center for Biomaterials and Biomechanics at the University of Minnesota School of Dentistry. After concluding 2 years of research, Dr Magne returned to the University of Geneva Dental School and assumed the position of Senior Lecturer in the Division of Fixed Prosthodontics and Occlusion until he was recruited to the University of Southern California in February 2004. He is the recipient of multiple awards from the Swiss Science Foundation and the Swiss Foundation for Medical-Biological Grants and was honored with the 2002 Young Investigator Award from the International Association for Dental Research as well as the 2007, 2009, and 2018 Judson C. Hickey Scientific Writing Awards (for the best research/clinical report of the year published in the Journal of Prosthetic Dentistry). He was also the recipient of the Distinguished Lecturer Award of the Greater New York Academy of Prosthodontics in 2016. Dr Magne is the author of numerous clinical and research articles on esthetics and adhesive dentistry and is an internationally known mentor and lecturer on these topics. The first edition of this textbook has been translated into 12 languages and is considered one of the most outstanding books in the field of adhesive and esthetic dentistry. Dr Magne is a founding member of the Academy of Biomimetic Dentistry and a mentor of the Bio- Emulation think-tank group. In 2012, he launched a revolutionary approach to the teaching of dental morphology, function, and esthetics (the 2D/3D/4D approach) for freshman students at the Herman Ostrow School of Dentistry at USC.

Prof Urs Belser graduated from the Dental Institute at the University of Zurich in Switzerland. He received postgraduate specialty training in reconstructive dental medicine (board-certified specialist) at the University of Zurich and was an Assistant Professor and then Senior Lecturer in the Department of Fixed Prosthodontics and Dental Materials there (Prof Dr Peter Schärer, MS) from 1976 to 1980. He was also a Visiting Assistant Professor from 1980 to 1982 in the Departments of Oral Biology (Prof Dr A.G. Hannam) and Clinical Dental Sciences (Prof Dr W. A. Richter) in the Faculty of Dentistry at the University of British Columbia in Canada. Between 1983 and 2012, Prof Belser acted as the Professor and Head of the Department of Fixed Prosthodontics and Occlusion at the University of Geneva School of Dental Medicine, serving as the president of the Swiss Association of Reconstructive Dentistry from 1984 to 1988. He was the recipient of the Scientific Research Award of the Greater New York Academy of Prosthodontics in 2002, President of the European Association of Prosthodontics (EPA) from 2002 to 2003, and Visiting Professor at Harvard University in the Department of Restorative Dentistry and Biomaterials Sciences (Prof Dr H. P. Weber) in 2006. Since 2012 he has been Guest Professor in the Department of Oral Surgery (Prof Dr D. Buser) and Department of Reconstructive Dentistry (Prof Dr Urs Braegger) at the School of Dental Medicine at the University of Bern. In 2013 he became an Honorary Fellow of The International Team of Implantology (ITI). Between 2013 and 2017 he served as editor-in-chief of Forum Implantologicum (ITI), and in 2014 he became a lifetime honorary member of the American College of Prosthodontists (ACP) and received the Lecturer of the Year Award. In 2018 he was presented the Morton Amsterdam Interdisciplinary Teaching Award (together with Prof Dr D. Buser). Prof Belser’s research is focused on implant dentistry, with special emphasis on esthetics and the latest developments in the field of CAD/CAM technology and high-performance dental ceramics, as well as on adhesive reconstructive dental medicine.