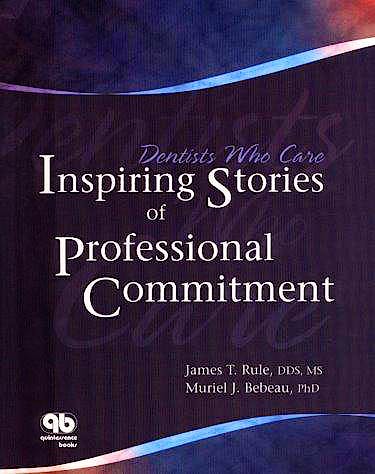 éticaenfermería ética y legislaciónhistoria de la enfermeríaantropología
Over the past several years, the authors have collected the stories of dentists nominated by their peers as models of commitment to moral ideas and principles. This volume is a collection of these stories, intended to evoke a fuller understanding of professional responsibilities for young people entering the discipline and to serve as a source of inspiration and renewal for those already established in their professional lives. Accompanying commentaries highlight the implications of the exemplars’ experiences for the reader, and discussion questions at the end of each story promote reflection on what it means to be a professional. Ideal for dental school orientation or ethics courses, postgraduate seminars, or dental study clubs.

Dentistry, like all professions, needs a moral identity that sustains its existing membership and also attracts honorable young men and women who seek a calling that is compatible with their standards. This book attempts to contribute to the ongoing development of such a moral identity. It contains stories and accompanying commentaries about 10 dentists who were identified by their colleagues as moral exemplars for acting upon ideals that are fundamental to their profession. Whereas all dental professionals are expected to act in accordance with their profession’s central values, these particular individuals have gone to exceptional lengths to act on behalf of the interests of others.

Most of the exemplars profiled in this book have spent their lives as community practitioners, and a few have been academics. Some are nationally known, while others have local or regional reputations. Some have dramatically visible accomplishments, while others are identified primarily as caring, thoughtful people.

The initial stimulus for this book was the result of experience gathered during the writing of the book Ethical Questions in Dentistry (Quintessence, 2004), in which dental practitioners in the field offered actual ethical dilemmas that they had encountered personally. Their enthusiasm and interest as participants in these discussions led to the conviction that extended interviews with dentists about values and moral issues would be valuable as the basis for another book.

Further support for the book emerged during a 1996 meeting of the Professional Ethics in Dentistry Network (PEDNET) that was held in San Diego to discuss the major ethical issues facing dentistry in the new millennium. One of the presenters was Dr Gerald Winslow, dean of Religion at Loma Linda University. He expressed his surprise, as a newcomer to the field of dental ethics, that he had not heard stories about dentists who might be thought of as “moral heroes”—people who stood for, and acted upon, ideals that were beyond their own self-interest. In his view, moral role models can play an important part in the development of a moral tradition, something he thought was relatively deficient in dentistry. Medicine, he felt, was ahead of dentistry in that regard and could readily point to numerous individuals who are known for moral leadership within their community. Dentistry also had them, he felt sure, but where were they?

Our judgment is that Dr Winslow is correct: While dentistry has many enriching traditions, its moral tradition would be enhanced if stories about some of its moral heroes were publicly known.

Not only does this book present the stories of 10 such dentists, but the stories are bookended by opening and closing chapters that contextualize and synthesize them. The book begins with an account of how the exemplars were nominated, selected, interviewed, and written about—as well as the various lenses applied to make meaning of the stories. It concludes with a chapter that captures the essence of the messages in their stories.

The book can be read in two different ways. One approach, for the casual reader, is simply to enjoy the narratives about 10 interesting, talented, and caring individuals whose actions help define dentistry’s moral identity. The other approach is to actively reflect on the meaning of the stories. As an aid to the latter approach, the reader will find questions included at the end of each chapter. For educators and study group leaders, Appendix A provides a series of useful suggestions for getting the most from this book.