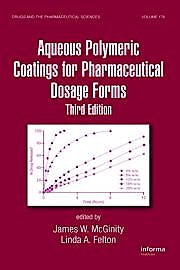 Thoroughly updated and expanded, this new Third Edition provides the latest information on dosage, forms, film defects, and polymer characterization. Written by renowned leaders in the field, Aqueous Polymeric Coatings for Pharmaceutical Dosage Forms is easily the most comprehensive book available on the market today. New to the Third Edition: the interaction of drugs with functional polymers the influence of processing parameters on coating quality the stabilization of polymeric film coats plasticizers and their applications in pharmaceutical coatings adhesion of polymeric films to solid substrates basic properties of latex and pseudolatex colloidal dispersions Key topics included: polymer interactions with drugs and excipients physical aging of polymeric films a complete overview and in-depth analysis of recent advances in the field, which includes information on the latest equipment used to apply polymers to a pharmaceutical system illustrated examples explaining the appropriate steps to be taken in order to solve formulation, processing, and stability problems to achieve an optimized dosage form.

JAMES W. MCGINITY is Professor of Pharmacy, College of Pharmacy, the University of Texas at Austin, received his B.Pharm. degree from the University of Queensland, Brisbane, Australia, and graduated with his Ph.D. degree in Physical Pharmacy from the University of Iowa, Iowa City. Dr. McGinity's current research includes film coating technology, hot melt extrusion, materials science, tablet technology, and modified release drug delivery systems. A keynote speaker at over 50 international conferences, Dr. McGinity has published more than 160 peer-reviewed articles, written over 25 book chapters in the field, and has been issued 23 U.S. patents. He is an AAPS Fellow, has refereed for many influential journals, and is on a select number of editorial boards, including Drug Development and Industrial Pharmacy, Pharmaceutical Development and Technology, and The European Journal of Pharmaceutics and Biopharmaceutics. LINDA A. FELTON is an Associate Professor of Pharmaceutics at the University of New Mexico, Albuquerque. She earned a B.S. in Pharmacy and a Ph.D. in Pharmaceutics from the University of Texas at Austin. Her research interests are focused on polymeric film coating technology, modified release systems, and topical/transdermal drug delivery. She has presented her work at national and international conferences and has published extensively in peer-reviewed journals. Dr. Felton is a reviewer for a number of pharmaceutical journals, and an editorial board member of Drug Development and Industrial Pharmacy. Dr. Felton has a joint appointment with the Department of Veteran's Affairs Cooperative Studies Program where she oversees the formulation development of clinical trials materials. She is a current member of AAPS, CRS, ISPE, and AACP.