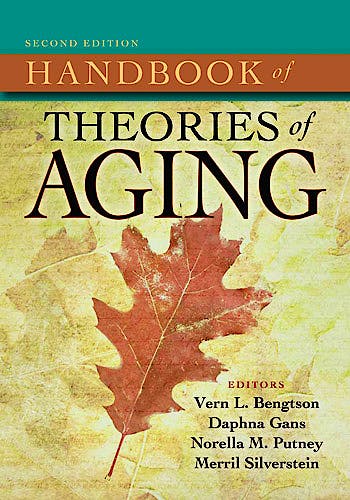 Handbook of Theories of Aging

The field of gerontology has often been criticized for being "data-rich but theory-poor." The editors of this book address this issue by stressing the importance of theory in gerontology. While the previous edition focused on multidisciplinary approaches to aging theory, this new edition provides cross-disciplinary, integrative explanations of aging theory: The contributors of this text have reached beyond traditional disciplinary boundaries to partner with researchers in adjacent fields in studying aging and age-related phenomena.

This edition of the Handbook consists of 39 chapters written by 67 internationally recognized experts in the field of aging. It is organized in seven sections, reflecting the major theoretical developments in gerontology over the past 10 years.

Required reading for graduate students and post doctoral fellows, this textbook represents the current status of theoretical development in the study of aging.

Vern L. Bengston, PhD, is AARP/University Chair in Gerontology and Professor of Sociology at the University of Southern California. He received his BA in 1959 at North Park College and his PhD from the University of Chicago in 1963. He directs the Longitudinal Study of Generations, which he began at U.S.C. in 1970, and continues to be involved in research on the sociology of the life course, socialization, ethnicity, and aging. His publications include The Social Psychology of Aging (1973), Youth, Generations, and Social Change (with Robert Laufer, 1974), Grandparenthood (with Joan Robertson, 1985), The Measurement of Intergenerational Relations (with David Mangen and Pierre Landry, 1987) as well as two volumes recently published by Springer Publishing Company: Intergenerational Linkages: Hidden Connections in American Society (edited with Robert Harootyan, 1994) and Adult Intergenerational Relations: Effects of Societal Change (edited with Linda M. Burton and K. Warner Schaie). He has published over 170 papers in professional journals and books on aging, the life course, and families. He has been a member of review panels for the National Institute of Mental Health and the National Institute on Aging; he has twice won the Reuben Hill Award for outstanding research on theory on the family, presented by the National Council on Family Relations; and most recently he has been honored by the American Sociological Associations Distinguished Scholar Award from the Section on Aging.

Merril Silverstein, PhD is a professor in the Davis School of Gerontology and the Department of Sociology at the University of Southern California. He holds a doctorate degree in sociology from Columbia University. He was previously research assistant professor at Brown University and before that an NIA post-doctoral scholar in aging research at USC. He has authored over 100 published works, including two edited volumes: Intergenerational Relations Across Time and Place (Springer Publishing) and From Generation to Generation: Continuity and Discontinuity in Aging Families (Johns Hopkins University Press). He is a Fellow of the Gerontological Society of America, the Brookdale National Fellowship Program, and the Fulbright International Senior Scholars Program.