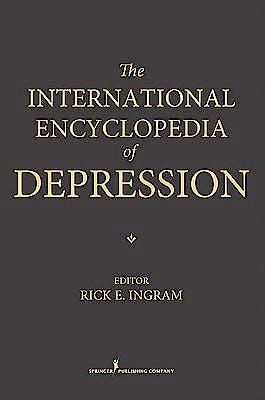 The International Encyclopedia of Depression

There is no more central topic to mental health professionals than depression. In the last 20 years, theory and research in depression has grown rapidly. The wealth of information now available on depression is enormous, but has not been summarized into a comprehensive encyclopedia until now.

In summarizing the vast amount of information on depression, The International Encyclopedia of Depression serves as an important resource for researchers, patients, students, and educated laypeople. This book presents holistic, interdisciplinary coverage of an important but misunderstood medical disorder.

Rick Ingram received his PhD in Clinical Psychology at the University of Kansas. The first part of his career was spent at San Diego State University where he was a professor of psychology and a core member in the joint San Diego State University/University of California, San Diego Doctoral Training Program in clinical psychology. He is currently a professor of psychology at the University of Kansas and serves as the editor of Cognitive Therapy and Research and as associate editor for the Journal of Consulting and Clinical Psychology. He has over 100 publications and over 175 conference presentations, mainly in the area of depression. He has authored or edited 6 books, the most recent of which are Ingram, R. E., & Price, J. (Eds.) Vulnerability to Psychopathology: Risk Across the Lifespan (Guilford, 2001) and Ingram, R. E., Miranda, J., & Segal, Z. V. Cognitive Vulnerability to Depression (Guilford, 1998). He is a Fellow of Division 12 of the American Psychological Association, and a Founding Fellow of the Academy of Cognitive Therapy. He is also the recipient of the Distinguished Scientific Award of the American Psychological Association for Early Career Contributions to Psychology, and earlier the New Researcher Award from the Association for the Advancement of Behavior Therapy.