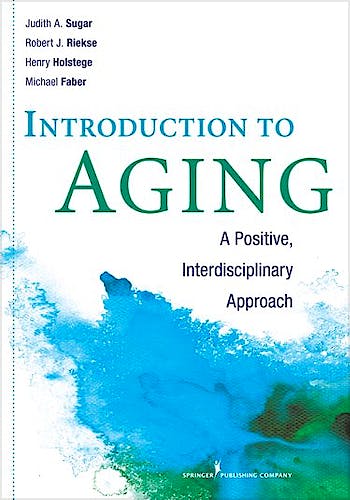 This research-based yet highly engaging textbook for undergraduate and masters-level college students ushers in a new paradigm of aging-that of aging as a positive stage of life. It offers an interdisciplinary perspective on the broad range of topics that comprise gerontology, using theoretical and research-based information while providing engrossing narratives and real examples of new trends, surprising findings, and controversial topics.

The volume dispels many of the myths about aging through careful reporting of facts, issues, and trends. It sheds a positive light on getting older by viewing the elderly and near old as a diverse, capable subset of our population. A discussion of roles in the family, workplace, and greater society along with physical changes, health, sexuality, living environment, work, retirement, and cultural considerations reveal the challenges and opportunities faced by our rapidly aging population.

This new textbook creates a paradigm shift with a very practical approach to problem solving. Aging is an asset. Its focus on well care rather than just sick care by understanding physical fitness, sexual fitness, consumer fitness, nutritional fitness and social fitness among others, all point to aging as an asset leading to civic fitness and the potential for intergenerational support. This text may help springboard Gerontology into the 21st Century as the field creating excitement and hope for students and teachers alike.

About the Authors
Acknowledgements
Dedication
Preface

PART I: GROWING OLDER IN THE 21ST CENTURY

Chapter 1: We Are Growing Older
Chapter 2: The Evolution of Aging

PART 2: THE REALITIES OF GROWING OLDER

Chapter 18: The Policies and Politics of Aging: A New Paradigm

Judith A. Sugar, PhD, is Associate Professor, School of Community Health Sciences, University of Nevada, Reno. She is a nationally recognized teacher and scholar in gerontology, and has served in leadership roles in prominent professional gerontological organizations, including AGHE, GSA, and APA's Division of Adult Development and Aging. She has chaired the Gerontology program at Colorado State University, and was associate director of the Borun Center for Gerontological Research at UCLA, and the director of Graham and Jean Sanford Center for Aging at the University of Nevada. Dr. Sugar was appointed to the Nevada State Commission on Aging, and chosen as a facilitator for the 1995 White House Conference on Aging. She has been honored with numerous awards including Fellow of the Association for Gerontology in Higher Education, Woman of Achievement by the University of Nevada, and the inaugural award for Distinguished Faculty Scholar by the Sanford Center for Aging. Dr. Sugar has published widely in the fields of psychology, gerontology, and education.

Robert J. Riekse, EdD, is the founder of the Older Learner Center at Grand Rapids Community College (GRCC) and the Calvin College-Grand Rapids Community College Consortium on Aging. Currently, he is the principal researcher of the GRCC Older Learner Center. A pioneer in aging education, he has developed a wide range of gerontology programs for college students, service providers in the aging network, and older persons and their family members. He was awarded a fellowship in the American Council on Education's Academic Leadership Program, and is a recipient of the Everett J. Soop Distinguished Adult Education Award. He has authored, co-authored, and directed numerous research grants and is a frequent presenter and committee member for the Association for Gerontology in Higher Education. He is currently developing gerontology-based television productions across Michigan, and his award-winning videos have been distributed to colleges and universities across the nation.

Henry Holstege, PhD, is Professor Emeritus of Sociology/Gerontology at Calvin College in Grand Rapids, Michigan. He is a recipient of the Everett J. Soop Distinguished Adult Educator Award, co-author of the book Caring for Aging Loved Ones, and the author and co-author of numerous monographs on aging. He has hosted and helped produce dozens of videos on various aspects of aging. These videos have been shown throughout the U.S. and are among the best selling videos on college campuses. He has received three Telly Awards for outstanding film productions. Dr. Holstege has also received federal and state grants for research on the aging process, and has been a keynote speaker on aging at conferences throughout the nation.

Michael Faber, MA, is Director of the Older Learner Center at Grand Rapids Community College. He has spent many years in service provider agencies in the aging network, where he gained direct hands-on experience with older adults. In his collegiate work he pioneered the creation of a caregiver network that has become a major model of agency networking to support dependent older adults. He is a leader of the community college section of the Association for Gerontology in Higher Education and has co-developed numerous collaborative projects among community colleges across the nation. He is a developer and teacher for a variety of gerontology courses/workshops/computer-based programs, and recently received a major award from the University of Michigan for his gerontology achievements.