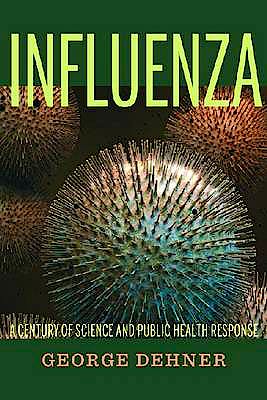 Influenza. a Century of Science and Public Health Response

In 1976, the outbreak of a new strain of swine flu at the Fort Dix, New Jersey, army base prompted an unprecedented inoculation campaign. Some forty-two million Americans were vaccinated as the National Influenza Immunization Program hastened to prevent a pandemic, while the World Health Organization (WHO) took a wait-and-see approach. Fortunately, the virus did not spread, and only one death occurred. But instead of being lauded, American actions were subsequently denounced as a “fiasco” and instigator of mass panic. In Influenza, George Dehner examines the wide disparity in national and international responses to influenza pandemics, from the Russian flu of 1889 to the swine flu outbreak in 2009. He chronicles the technological and institutional progress made along the way and shows how these developments can shape an effective future policy. Early pandemic response relied on methods of quarantine and individual scientific research. In the aftermath of World War II, a consensus for cooperation and shared resources led to the creation of the WHO, under the auspices of the United Nations. Today, the WHO maintains a large and proactive role in responding to influenza outbreaks. International pandemic response, however, is only as strong as its weakest national link—most recently evidenced in the failed early detection of the 2009 swine flu in Mexico and the delayed reporting of the 2002 SARS outbreak in China. As Dehner’s study contends, the hard lessons of the past highlight the need for a coordinated early warning system with full disclosure, shared technologies, and robust manufacturing capabilities. Until the “national” aspect can be removed from the international equation, responses will be hampered, and a threat to an individual remains a threat to all.

George Dehner examines the wide disparity in national and international responses to influenza pandemics, from the Russian flu of 1889 to the swine flu outbreak in 2009. He chronicles the technological and institutional progress made along the way and shows how these developments can shape an effective future policy.

“Flu shots are an autumn ritual for millions of Americans, but few know the history of the battle against influenza waged by physicians and public health officers around the globe over the past 120 years. Dehner explains how past pandemics, which increasingly shaped reliance upon vaccination and surveillance as prevention, evolved from local to regional to national to international responsibility. All those interested in the history of disease and the history of public health will benefit from his rich discussion of how today’s globalism is again changing how quickly diseases spread as well as the politics and requirements of influenza prevention.”—Alan M. Kraut, American University

“Well researched and written, this study ranges from the Russian flu of 1889 to the swine flu of 2009, embracing biology and history, medicine and politics, drug research and government regulation. Dehner skillfully frames U. S. influenza experience in the global context and sheds new light on the power of the virus to sicken, kill, and confound.”—Carol R. Byerly, author of Fever of War: The Influenza Epidemic in the U.S. Army during World War I

“Joins a select few other recent books on influenza as a useful resource . . . His research is sound and extensive and his prose is clear and concise.”—Journal of the History of Medicine