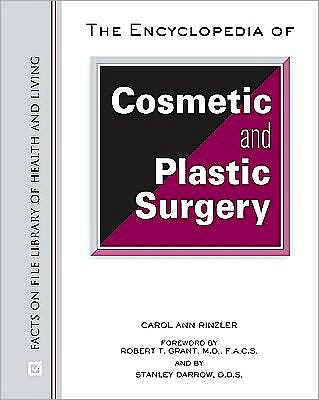 The Encyclopedia of Cosmetic and Plastic Surgery

Plastic surgery is a surgical specialty dedicated to the reconstruction of facial and body defects due to birth disorders, trauma, burns, and disease. The most common plastic surgery procedures include tumor removal, scar revision, hand surgery, and breast reduction, while the most popular cosmetic surgeries are Botox®, breast augmentation, chemical peel, dermabrasion, liposuction, and rhinoplasty. According to the American Society of Plastic Surgeons, nearly 11 million cosmetic surgery procedures and more than 5 million reconstructive plastic surgeries were performed in 2006, and the number of surgeries is rising steadily each year.

In more than 400 entries, The Encyclopedia of Cosmetic and Plastic Surgery provides sound information on cosmetic and plastic surgery for students and professionals alike. This comprehensive new reference covers all aspects of this popular topic, detailing surgical techniques and practices, medical conditions, social controversies, and the history of cosmetic and plastic surgery. A glossary explains key terms and common jargon, and appendixes include medical associations, journals, and Web sites.

Carol Ann Rinzler is the author of 27 books on food, health, and nutrition, including the highly successful Nutrition for Dummies and Heartburn and Reflux for Dummies. She has written on diet and nutrition for numerous magazines, and her articles have appeared in many national publications, including the New York Daily News, The New York Times, and Women’s Day. She is also the author of Facts On File's The New Complete Book of Food, Second Edition. She lives in New York.

Foreword author Robert T. Grant, M.D., M.Sc., F.A.C.S., is acting chief of the combined Divisions of Plastic Surgery at New York-Presbyterian Hospital. He is also an assistant professor of clinical surgery at Columbia University, College of Physicians and Surgeons. Grant received his M.D. from Albany Medical College and completed his general surgery and plastic surgery residencies at The New York Hospital-Cornell Medical Center. He became the plastic surgery residency program director at New York-Presbyterian Hospital and chief of plastic surgery at the Columbia University Medical Center campus of New York-Presbyterian Hospital in 1999. Board-certified in general surgery and plastic surgery, Grant is a member of the American Society for Aesthetic Plastic Surgery and the American Society of Plastic Surgeons. He is a fellow of the American College of Surgeons and resides in New York.

Foreword author Stanley Darrow, D.D.S., F.A.C.D., F.A.G.D., graduated from the undergraduate program at New York University in University Heights. He received a master’s degree in Latin American studies and earned his dental degree at New York University College of Dentistry. He was a professor in the Department of Operative Dentistry for 23 years and conducted a private practice in New York City, where he continues to practice today. Darrow is affiliated with the American College of Dentists and the Academy of General Dentists.