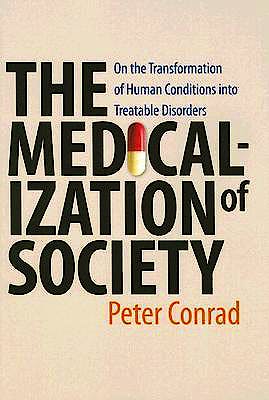 The Medicalization of Society. On the Transformation of Human Conditions into Treatable Disorders

Over the past half-century, the social terrain of health and illness has been transformed. What were once considered normal human events and common human problems—birth, aging, menopause, alcoholism, and obesity—are now viewed as medical conditions. For better or worse, medicine increasingly permeates aspects of daily life.

Building on more than three decades of research, Peter Conrad explores the changing forces behind this trend with case studies of short stature, social anxiety, "male menopause," erectile dysfunction, adult ADHD, and sexual orientation. He examines the emergence of and changes in medicalization, the consequences of the expanding medical domain, and the implications for health and society. He finds in recent developments—such as the growing number of possible diagnoses and biomedical enhancements—the future direction of medicalization.

Conrad contends that the impact of medical professionals on medicalization has diminished. Instead, the pharmaceutical and biotechnical industries, insurance companies and HMOs, and the patient as consumer have become the major forces promoting medicalization. This thought-provoking study offers valuable insight into not only how medicalization got to this point but also how it may continue to evolve.