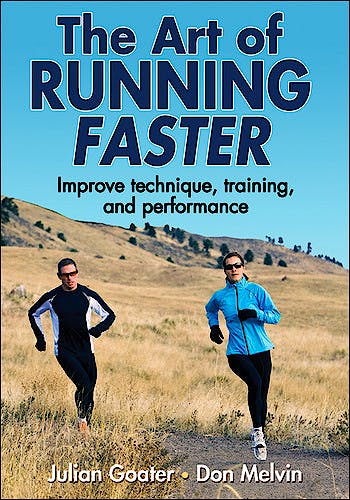 The Art of Running Faster

Any runner can tell you that the sport isn't just about churning out miles day in and day out. Runners have a passion, dedication, and desire to go faster, longer, and farther. Now, The Art of Running Faster provides you with a new approach to running, achieving your goals and setting your personal best.

Whether you're old or young, new to the sport or an experienced marathoner, this guide will change how you run and the results you achieve. The Art of Running Faster challenges the stereotypes, removes the doubts and erases the self-imposed limitations by prescribing not only what to do but also how to do it. Inside, you will learn how to

Much more than training tips and motivational stories, The Art of Running Faster is your guide to improved technique and optimal performance. Let Julian Goater show you a new way to run faster, farther and longer.

Part One: Building the Base
Chapter One Pushing the Limits: The Secrets to Running Faster
Chapter Two Aiming True: Every Run Should Have a Purpose
Chapter Three Running With Skill: Running Technique Shapes Performance
Chapter Four Gearing Up for Success: Balancing Stride Length and Cadence
Chapter Five Flexible You: The Essentials of Stretching
Chapter Six Take a Deep Breath: Breathing Is Your Vital Capacity
Chapter Seven Going Clubbing: The Benefits of Running Clubs

Part Two: Sharpening the Knife
Chapter Eight The Ups and Downs of Running: The Importance of Hill Training
Chapter Nine Strength in the Fields: The Cross Country Tradition
Chapter Ten Running Round in Circles: Speed Is of the Essence
Chapter Eleven Ouch, That Hurts! Preventing and Recovering from Injury
Chapter Twelve All in Your Head: Mental Strategies and More
Chapter Thirteen Reaching Your Peak: Periodization and Your Best Performance

Julian Goater is a former world-class runner. He has competed in numerous championships, including the World Championships, the Commonwealth Games, European Championships and World Cross Country Championships. His times for 5,000 and 10,000 meters remain among the fastest ever by a British athlete.

Since retiring from competing, Julian has been coaching runners of all abilities. His athletes continue to achieve remarkable results by focusing on modifying their running techniques and training prescriptions. Julian has been active in road running, cross country running, duathlon and triathlon. He has won gold twice in his age group at the World Duathlon Championships, and has also won the British Triathlon in his age group. He currently lives in Surrey with his wife, Sue.

Don Melvin is a published author, journalist and lifelong fun runner. His international assignments have included coverage of the Olympic Games in Atlanta and Athens. He has also reported on international political and social topics. Don is currently an editor and correspondent for the Associated Press and has published, under another name, numerous novels for children. A native Vermonter, he now lives in Brussels with his wife, Rodica.