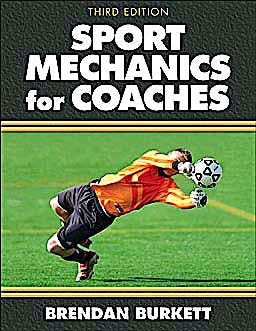 Most coaches are reluctant to study sport mechanics; from experience they equate it with boring texts loaded with formulas, calculations, and scientific terminology. That’s not the case with Sport Mechanics for Coaches. This updated third edition provides an introductory look at the mechanics of sport in a manner that’s understandable and usable for the novices in the field.

Author Brendan Burkett—Paralympic gold medalist and world-record holder—pours his love of sport and his expertise as an award-winning engineer and biomechanics professor into this enhanced, revised, and reformatted text. Divided into three parts covering the fundamentals of sport mechanics, mechanical principles, and application of the knowledge to sport contexts, this text highlights real-life sporting achievements and the mechanics behind them. Various pedagogical aids including review questions and practical activities are featured, allowing students and coaches to gauge their understanding of key concepts chapter by chapter.

Since the previous edition was published, technological advancements have expanded the coach’s and athlete’s toolbox. Sport Mechanics for Coaches includes nearly 150 illustrations and photos and all-new content to help readers understand and incorporate technology and state-of-the-art sport equipment to enhance training, identify errors in technique, and improve performance.

Coaches, students, and athletes with a curiosity about how and why things work in the world of sport and a desire to improve performance will find Sport Mechanics for Coaches refreshingly easy to read, comprehend, and put into practice.

Chapter 3 Getting a Move On

•How an Athlete Moves (Forces, Momentum, and Impulse)
•What Happens When We Move (Work, Power, Energy, Rebound, and Friction)
•How to Measure “Getting a Move On” in a Running Gait

•How an Athlete Rotates (Angular Motion)
•Mechanical Principles for Rotation (Lever Systems)
•How an Athlete Initiates Rotation
•What Happens When We Rotate (Velocity, Force, Inertia, and Momentum)
•How to Measure Angular Velocity During Cycling

Chapter 5 Don’t Be a Pushover

Chapter 6 Going With the Flow

Part III Putting Your Knowledge of Sport Mechanics to Work

•Step 1: Observe the Complete Skill
•Step 2: Analyze Each Phase and Its Key Elements
•Step 3: Use Your Knowledge of Sport Mechanics in Your Analysis
•Step 4: Select Errors to Be Corrected
•Step 5: Decide on Appropriate Methods for the Correction of Errors

As a textbook or supplemental textbook for students in coaching, physical education, and kinesiology and for exercise physiology majors or minors taking introductory biomechanics or sport mechanics courses. As a reference for sport coaches—primarily high school coaches—who need to understand fundamental concepts of mechanics in order to improve their athletes’ performance. As a reference for physical education, physics, and kinesiology professionals working with student-athletes; and as a reference for athletes who need to understand mechanics and technology and maximize their potential.

Brendan Burkett is an associate professor at the University of the Sunshine Coast in Queensland, Australia. He received his undergraduate and master’s degrees in engineering and attained his doctorate in biomechanics from the Australian Institute of Sport. Burkett’s specializations are teaching biomechanics, sports coaching, and performance enhancement. His research revolves around technology developments in human health and performance. Burkett has written more than 30 peer-reviewed articles and 180 conference publications for journals in sport science, biomechanics, and coaching.

As an international elite athlete, Burkett represented Australia for 13 years as a swimmer and was the Paralympic champion, world champion, world-record holder, and multiple medalist in the Commonwealth Games and Australian national championships. He served as the Australian team captain for the 1996 Atlanta Paralympic Games and as the flag bearer for the Opening Ceremonies of the Sydney 2000 Olympics. Burkett served as the national sport science coordinator for the Australian Paralympic team for the 2002 and 2006 World Championships and the 2004 Paralympic Games. He also worked with the Australian swimming team in preparation for the 2008 Beijing Olympics.

He has received several awards, including the Australia Day Sporting Award, the Order of Australia Medal (OAM) as an ambassador for the Sydney Paralympic Games, and the Australian Sports Medal. Burkett was an invited scholar for the Erasmus Mundus Masters in Adapted Physical Activity in 2007 and was part of the Prime Minister’s 2020 Summit in the theme area of developing a long-term health strategy.