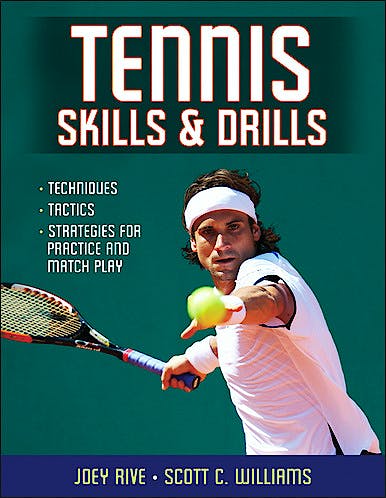 Solid groundstrokes, a confident net game, a dictating serve, a sharp return game, and specialty shots for every situation—build your game from the ground up with the techniques and shots that are essential for success in today’s versatile and powerful game. Combine that with winning tactics for singles and doubles, and Tennis Skills & Drills is your blueprint for taking your game to the next level.

Start with assessing the basic techniques for the various strokes and see how you can improve your footwork, grip choices, and swing patterns. Then increase your options with spins, angles, and depth. Complete instruction for all of the strokes along with over 110 practice drills is like having your own personal coach.

Since your technique is only as effective as your tactics, the book also covers the key tactical principles and game plans for maximizing your strengths while minimizing your opponent’s. You’ll learn to prepare for, adapt to, and counter every style of play.

Whether your goal is to beat your favorite playing partner or to win the next league, state, or national title, Tennis Skills & Drills is your guide to mastering the game.

Joey Rive played on the ATP Tour for 8 years, competing in each of the 4 Grand Slams, and achieved a top 60 player ranking in singles and top 50 ranking in doubles. Rive also played Davis Cup tennis for Puerto Rico and practiced with the U.S. Davis Cup team. Rive has been inducted into the Hall of Fame at Florida State University, where he won MVP honors for his team and conference as a player. He also received Tennis magazine’s Sportsman of the Year Award.

Rive is a USPTA, PTR, and USTA certified high-performance and sports coach. Currently, he is a teaching professional at T Bar M Racquet Club in Dallas, Texas.

For almost three decades, Scott Williams has been an internationally renowned coach working with players such as No. 2 ATP Tour player Tommy Haas and No. 1 ATP Tour doubles player Max Mirnyi. Williams is the author of Serious Tennis (Human Kinetics) and author and producer of the recently released Spiritually Tough Tennis DVD. He is president of Match Point Ministries and was voted the 2009 Coach of the Year, receiving the Ace Excellence Award for his work with upcoming junior tennis players.

Williams is currently the tennis director at Saint Andrew’s School in Boca Raton, Florida. He is certified as a USTA high-performance coach, USPTA level 1 professional, and PSIA level III instructor.