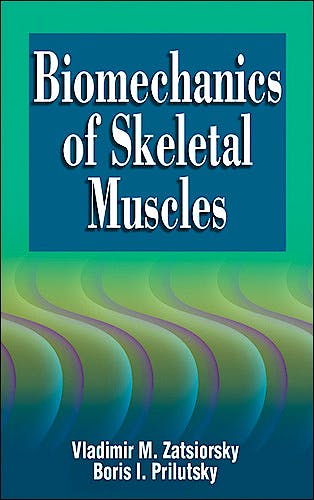 Richly illustrated and presented in clear, concise language, Biomechanics of Skeletal Muscles is an essential resource for those seeking advanced knowledge of muscle biomechanics. Written by leading experts Vladimir Zatsiorsky and Boris Prilutsky, the text is one of the few to look at muscle biomechanics in its entirety—from muscle fibers to muscle coordination—making it a unique contribution to the field.

Using a blend of experimental evidence and mechanical models, Biomechanics of Skeletal Muscles provides an explanation of whole muscle biomechanics at work in the body in motion. The book first addresses the mechanical behavior of single muscles—from the sarcomere level up to the entire muscle. The architecture of human muscle, the mechanical properties of tendons and passive muscles, the biomechanics of active muscles, and the force transmission and shock absorption aspects of muscle are explored in detail. Next, the various issues of muscle functioning during human motion are addressed. The transformation from muscle force to joint movements, two-joint muscle function, eccentric muscle action, and muscle coordination are analyzed.

This advanced text assumes some knowledge of algebra and calculus; however, the emphasis is on understanding physical concepts. Higher-level computational descriptions are placed in special sections in the later chapters of the book, allowing those with a strong mathematical background to explore this material in more detail. Readers who choose to skip over these sections will find that the book still provides a strong conceptual understanding of advanced topics.

Biomechanics of Skeletal Muscles also contains numerous special features that facilitate readers’ comprehension of the topics presented. More than 300 illustrations and accompanying explanations provide an extensive visual representation of muscle biomechanics. Refresher sidebars offer brief reminders of mathematical and biomechanical concepts, and From the Literature sidebars present practical examples that illustrate the concepts under discussion. Chapter summaries and review questions provide an opportunity for reflection and self-testing, and reference lists at the end of each chapter provide a starting point for further study.

Biomechanics of Skeletal Muscles offers a thorough explanation of whole muscle biomechanics, bridging the gap between foundational biomechanics texts and scientific literature. With the information found in this text, readers can prepare themselves to better understand the latest in cutting-edge research.

Part I. Muscle Architecture and Mechanics

Part II Muscles in the Body

Vladimir M. Zatsiorsky, PhD, is a world-renowned expert in the biomechanics of human motion. He has been a professor in the department of kinesiology at Pennsylvania State University since 1991 and was a director of the university's biomechanics laboratory.

Before coming to North America in 1990, Dr. Zatsiorsky served for 18 years as professor and chair of the department of biomechanics at the Central Institute of Physical Culture in Moscow. He has received several awards for his achievements, including the Geoffrey Dyson Award from the International Society of Biomechanics in Sports (the society's highest honor), Jim Hay’s Memorial Award from the American Society of Biomechanics, and the USSR's National Gold Medal for the Best Scientific Research in Sport in 1976 and 1982. For 26 years he served as consultant to the national Olympic teams of the USSR. He was also the director of the USSR's All-Union Research Institute of Physical Culture for three years.

He has authored and coauthored more than 400 scientific papers and 15 books that are published in English, Russian, German, Italian, Spanish, Portuguese, Chinese, Japanese, Polish, Bulgarian, Romanian, Czech, Hungarian, and Serbo-Croatian. Dr. Zatsiorsky has been conferred doctor honoris causa degrees by the Academy of Physical Education (Poland, 1999) and the Russian State University of Physical Culture and Sport (2003). Among his books are Kinematics of Human Motion, Biomechanics in Sport: Performance Enhancement and Injury Prevention, Kinetics of Human Motion, and Science and Practice of Strength Training (coauthor).

He and his wife, Rita, live in State College, Pennsylvania.

Boris I. Prilutsky, PhD, is an associate professor in the School of Applied Physiology and director of biomechanics and motor control laboratory at the Georgia Institute of Technology in Atlanta, Georgia. Before that position, he was a senior research scientist in Georgia Tech’s Center for Human Movement Studies from 1998 to 2005.

His research interests include muscle biomechanics, neural control of movements, and motor learning. His research contributed to the development of methods for quantifying mechanical energy transfer by two-joint muscles between body segments during locomotion and to the understanding of muscle coordination during human motion. Prilutsky has published more than 50 peer-reviewed research articles and five book chapters, and he is the author of six patents. His research is supported by the National Institutes of Health (NIH) and National Science Foundation (NSF).

Prilutsky is a member of the American Society of Biomechanics and a 1995 recipient of the organization’s Young Scientist Award. He is also a member of the International Society of Biomechanics, Society for Neuroscience, and the Neural Control of Movement Society. He serves as a reviewer for over 30 professional research journals and for the NIH, NSF, South Carolina Space Grant Consortium, Consiglio Nazionale delle Ricerche (CNR), and the Austrian Science Fund.Prilutsky resides in Duluth, Georgia, and enjoys mountain biking, reading, and traveling in his free time.