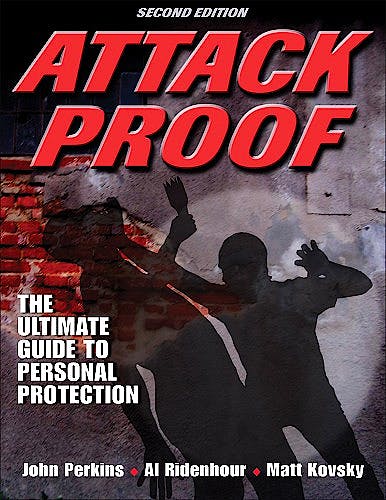 Real violence is not like anything you see in the movies or the ring. Ask any street cop or soldier: Real violence is total chaos and cannot be defended against with either patterned technique training or sport fighting.

Attack Proof presents a proven personal protection system, called guided chaos, for anticipating and fending off even the most brutal assaults. It’s based on the real-world experiences and forensic homicide research of a former New York cop and instructor for members of the FBI, U.S. Marines and air marshals, and security personnel for dignitaries.

Attack Proof trains you to become a martial realist by preparing you for the unexpected. Rather than robotic techniques or rules-based sport fighting, Attack Proof teaches you how to adapt, improvise, and survive, creating your defense spontaneously as you need it. With protection strategies for larger assailants, car and airline hijackings, workplace violence, multiple attackers, fighting on the ground and in stairwells, and attacks and defenses using guns, knives, sticks, and canes, Attack Proof is the next best thing to having your own personal bodyguard.

Featuring the same tactics used by select police, military, and security professionals to defend themselves, Attack Proof is the trusted guide to personal protection when real violence occurs.

John Perkins has been training and teaching martial arts and self-defense for over 50 years. He has taught hand-to-hand tactics to Marine combat units, Marine scout sniper units, and military counterdrug forces. He also has instructed law enforcement personnel from the FBI, New York City Police Department, New York State Police, and the New York City Transit Police. A former bodyguard to Malcolm Forbes and Israeli Defense Minister Moshe Dayan, Perkins is a forensic crime scene expert and a master handgun instructor and marksman. He has extensive experience in the martial arts of hapkido, taekwondo, kyukushinkai, kempo karate, judo, jujitsu, goju, and tai chi chuan. He has trained in Native American fighting principles since the age of five. Perkins has battled in unlicensed pit fights, a savage forerunner to today’s Ultimate Competitions. He is the founder of guided chaos, an adaptive, internal-energy art whose principles are detailed in this book. Perkins' system is recognized by the International Combat Martial Arts Federation, through which he holds a fifth-degree black belt in combat martial arts. Perkins lives in Nyack, New York.

Al Ridenhour, a lieutenant colonel in the United States Marine Corps Reserves, has been training in the martial arts since 1985. He has studied tai chi, isshinryu karate, and ken jitsu. An all-conference wrestler in high school who later learned boxing in the Marine Corps, Ridenhour is also a sixth-degree master in guided chaos. He is a veteran of Operation Iraqi Freedom and the Gulf War, where he commanded a 50-man infantry unit and served as an instructor in unarmed combat for his Marine unit and for the battalion’s scout sniper platoon. He has also worked with various law enforcement agencies, U.S. Customs, U.S. Border Patrol, and the Drug Enforcement Agency during counterdrug missions. He is a member of the International Combat Martial Arts Federation. Ridenhour lives in Hartsdale, New York.

Matt Kovsky is an editor for CBS Television. His work has earned him two Emmys, one for outstanding editing and another for producer of an outstanding entertainment series, as well as many other awards. He is trained in isshinryu karate and jeet kune do and has a fifth-degree black belt in guided chaos. Kovsky lives in Westchester, New York.

"The difference between boxing and street fights is that many street fights can mean life or death. Attack Proof teaches the most effective and easy-to-learn methods of self-defense in existence today."

"I've used the Attack Proof methods in the street, and they really work."

"Attack Proof’s combat methods are the most efficient and devastating that I have experienced before, during, and since the military."

"Attack Proof creator John Perkins is an expert in the dynamics of violence."