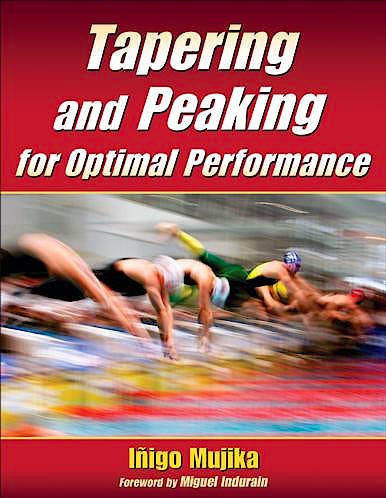 Tapering and Peaking for Optimal Performance

Tapering and Peaking for Optimal Performance offers in-depth discussion of the science, strategy, and program design of the tapering phase of training. This first-ever book devoted to the subject presents current scientific data on tapering, its physiological and psychological effects, and how these effects relate to athletic performance. Featuring various training models and experiential knowledge, this book allows readers to design optimal tapering programs for each athlete.

Though most coaches and sport scientists are aware of the key role of tapering in preparation for competition, many tapering programs are developed by a trial-and-error process, often leading athletes to fall short of their optimal performance. In Tapering and Peaking for Optimal Performance, author Iñigo Mujika, one of the foremost researchers on tapering in sport, presents various models and explains current scientific data on tapering and its effects on physiological and psychological factors that support or hinder performance. Using this information, coaches, athletes, and sport scientists will be able to do the following:

Parts I and II of the text provide the academic reader with a clear understanding of the foundations, characteristics, and physiological and psychological changes associated with tapering. Readers will explore performance implications of tapering, examine tapering with the use of mathematical models, and learn the unique aspects of tapering for team sports. Special elements with clear explanations of scientific data and performance information are provided to help readers—even those without a strong background in science—grasp the theoretical concepts presented in the text. A running glossary also helps readers quickly define terms, and summary sections in each chapter provide quick reference and an overview of the content.

In part III of the book, 16 internationally known coaches and athletes share the tapering strategies that enabled them to succeed in major international competitions. Readers will find sport-specific strategies for individual endurance sports, sprint and power events, precision sports, and team sports. By combining the experience-based knowledge of elite sport performers and coaches with the performance data presented in parts I and II, athletes, coaches, and students will learn to create optimal tapering programs for every sport.

Tapering and Peaking for Optimal Performance is a powerful resource for athletes, coaches, and sport scientists to use in dealing with the important tapering period of a training program with increased confidence. By combining current scientific research with real-world examples, this text presents the most complete look at tapering available, and it encourages further study of this vital and sometimes elusive aspect of training for success.

Iñigo Mujika, PhD, is a lecturer in the department of physiology, faculty of medicine and odontology, at the University of the Basque Country in Leioa, Spain. Previously, Mujika was also the head of the department of research and development at the Spanish professional football team Athletic Club Bilbao. As a researcher, sport science practitioner, and coach, Mujika is widely considered one of the most respected experts on tapering and peaking for optimal performance.

Since 1992, Mujika has been devoted to the research of tapering and peaking for sport performance. He has published over 20 peer-reviewed scientific articles, 6 book chapters, and 10 other publications on tapering-related issues. He has also presented nearly 70 lectures on tapering at conferences and seminars worldwide.

As a sport physiologist, Mujika works closely with elite athletes and coaches in a variety of individual and team sports. From 2003 to 2004, Mujika was senior physiologist at the Australian Institute of Sport. In 2005, he worked as physiologist and trainer of the professional road bicycle racing team Euskaltel Euskadi. He is also a coach of world-class triathletes, having coached Olympians Ainhoa Murua (Athens 2004 and Beijing 2008) and Eneko Llanos (Athens 2004).

Mujika is a member of the American College of Sports Medicine and serves as associate editor of the International Journal of Sports Physiology and Performance. He holds a doctoral degree in biology of muscular exercise (1995) from the University of Saint-Etienne in France and a second doctorate in physical activity and sport sciences (1999) along with an Extraordinary Doctorate Award from the University of the Basque Country in Spain. In 2002 and 2007 he received the National Award for Sport Medicine Research from the University of Oviedo in Spain. He has also received two awards for his work with triathletes: Best Coach of Female Athlete (2006) from the Spanish Triathlon Federation and the High Performance Basque Sport Award (2007) from the Basque Sport Foundation.

"In Tapering and Peaking for Optimal Performance, competitive athletes will finally find the scientific answers to all their practical questions about tapering. This book will provide a substantial advantage to coaches and athletes."

"Tapering and Peaking for Optimal Performance bridges the gap from science to competition. Inigo Mujika tackles the critical issues of performance with ease and excellence."