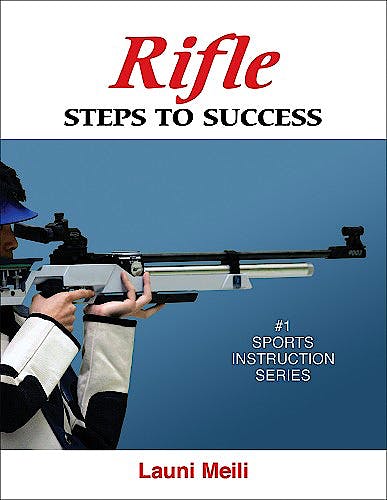 Rifle: Steps to Success covers every aspect of the sport:

Launi Meili has a long and distinguished career in rifle. Meili won gold at the 1992 Olympic Games in Barcelona and set three Olympic records in her career. She placed in the air rifle competition that year and had also placed in both air rifle and smallbore at the 1988 Olympics in Seoul. Meili has also won the three-position rifle championship seven times while setting three world shooting records and numerous national records throughout her career.

In 1992, Meili turned to coaching. She was the assistant coach for the U.S. national rifle team from 1997 to 2000. She wrote the International Coach Certification Program, which is the highest coaching credential recognized by USA Shooting and the NRA. Meili then moved on to coach at the college level at the University of Nebraska. During that time she was inducted into the Shooting Hall of Fame. In 2007 Meili took on the challenge of being the head coach of the United States Air Force Academy NCAA rifle team.

"Rifle: Steps to Success really hits the mark! I highly recommend it to anyone interested in becoming a rifle shooter as well as experienced shooters looking for ways to improve their performance.

All ancillary materials for this text are FREE to course adopters and available at www.HumanKinetics.com/RifleStepsToSuccess.