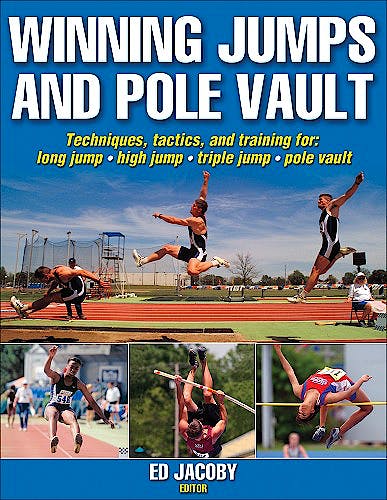 Long jump, triple jump, high jump, and pole vault. From techniques and training to strategy and mental preparation, Winning Jumps and Pole Vault is the only book that covers it all.

Every phase of every event—from approach to takeoff to landing—is described to convey proper technique. Learn how to recognize and correct common technical flaws and rely on over 25 event–specific drills to perfect technique.

With preevent preparation, conditioning programs, and jump and vault strategies, Winning Jumps and Pole Vault is the one resource track and field coaches and athletes can’t afford to be without.

As head track and field coach at Boise State University in Idaho for 24 years, Ed Jacoby is a 3-time NCAA District Coach of the Year and 10-time Big Sky Conference Coach of the Year. He has served as assistant coach at the 1992 Olympic Games, as head coach for the 1993 world championship team, as high-jump coordinator for USA Track & Field, and as chair of the National Track & Field Development Committee.

Jacoby, a master coach, has authored three books and is sought for his expertise in biomechanics, principles of training, and training methodology. His book The Complete Book of Jumps was hailed by Track & Field News as the best book ever written on the jumping events. Jacoby is a member of the USA Track & Field and Cross Country Coaches Association Hall of Fame.

Will Freeman is the head track coach at Grinnell College in Iowa. He is a sought-after clinician, instructing and speaking at clinics around the United States and the world. He has written 3 books and has authored 19 coaching videos and has served as national chairman for coaching education for USA Track & Field.

Keith Henschen is a professor in the department of exercise and sport science at the University of Utah with an area of expertise in applied sport psychology. He has published over 200 articles, 35 chapters of books, and 5 monographs. He has coauthored 5 books and has made over 400 presentations. He has consulted with numerous Olympic, professional, and world-class performers. Henschen is also the sport psychology consultant for the Utah Jazz.

Cliff Rovelto, Kansas State University head track and field coach, has coached 3 NCAA champions, 36 All-Americans, and 22 conference champion high-jumpers. His jumpers have won 9 national titles and he has had 4 Olympic competitors. A 6-time U.S. team staff member for international teams, Rovelto was Women’s Outdoor National Coach of the Year in 2001.

Irving “Boo” Schexnayder was the jumps and multievent coach at Louisiana State University. His jumpers have won eight indoor and outdoor NCAA titles in the triple jump since 2000, and they placed 1-2-3 at the 2004 indoor championships. Schexnayder was assistant coach for Team USA at the IAAF World Junior Championships in 2007, and he also served on the USA Track & Field coaching staff for the 2008 Olympic Games.

Kyle Tellez is the associate head coach for the University of Houston. During his tenure working with Houston’s jumpers and multiathletes, he has produced seven All-Americans, including two-time NCAA long-jump champion Jenny Adams.

Tom Tellez has coached many elite athletes, including Carl Lewis. He coached at UCLA before becoming head coach for the University of Houston, where he coached for 22 years. Between 1984 and 1996, six of the seven U.S. sprinters who won Olympic gold medals were coached by Tellez, who served as head coach for the 1991 world championship team. Tellez is a member of the USA Track & Field and Cross Country Coaches Association Hall of Fame.

Part I: Biomechanics of Jumping and Pole Vault
Chapter 1. The Approach (by Ed Jacoby)
Chapter 2. Takeoff and Landing (by Ed Jacoby)

Appendix
References
Bibliography
Index
About the Editor
About the Contributors