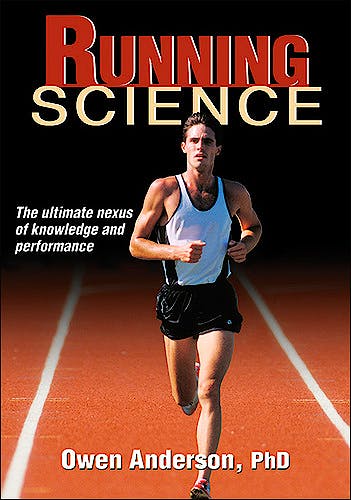 More than 50 years ago, New Zealand's Arthur Lydiard started using terms like base training, periodization, and peaking. His U.S. counterpart, Bill Bowerman, brought Lydiard's term for what until then had been called roadwork, or jogging, to the States. Soon after, the 1970s running boom started, spurred by exercise-advocating research from the growing fields of exercise science and sports medicine and from enthusiasts such as Jim Fixx,author of The Complete Book of Running. One of Bowerman's former runners at the University of Oregon, Phil Knight, saw to it that those millions of new runners had swoosh-adorning footwear designed specifically for their sport.
The pace of knowledge enhancement and innovation has, in fact, been so brisk through the years that even highly informed runners could be excused for not keeping up, but no longer. Running Science is a one-of-a-kind resource:

Elite running coach Owen Anderson presents this comprehensive work in a compelling way for runners. A PhD and coach himself, Anderson has both a great enthusiasm for sharing what scientific studies offer the running community and a keen sense of what's really important for today's informed runners to know.

Prologue: The Quest for Knowledge in Running

Epilogue: The Future of Running
References
Index
About the Author

Owen Anderson, PhD, has been a regular contributor to Runner’s World, Shape, Men’s Health, Peak Performance, National Geographic Adventure, and Sports Injury Bulletin. He has written extensively on the topics of running training, strength training for running, sports nutrition, and injury prevention, and he developed the neural system of training, which diminishes the emphasis on mileage and promotes the use of high-quality running and the progression of running-specific strength training to achieve optimal running fitness.

Anderson is the founder of Lansing Sports Management, which coaches elite athletes from Kenya and manages their international competitions. He has enjoyed a successful career coaching runners of all levels, including notables such as Benjamin Simatei, the winner of the Park Forest 10-mile race in Chicago, Illinois, and Chemtai Rionotukei, who in 2012 and 2013 has six victories, two course records, and 14 top-four finishes in U.S. road races, including a win at the 2013 Fifth Third River Bank 25K.

Anderson is the race director of the annual Lansing Marathon, Lansing Half Marathon, and Ekiden Relay. In addition, he hosts running camps throughout the U.S., including the Lansing Marathon Running Camp in Thetford Center, Vermont. Anderson is also the CEO of Lansing Moves the World, a nonprofit foundation that coordinates three projects, including an after school program for Lansing children age 9 to 14, a tree planting program in east Africa, and a program for families and children victimized by the recent violence in the Tana River Delta district of Kenya.
Anderson was awarded a National Science Foundation fellowship and completed his PhD at Michigan State University.