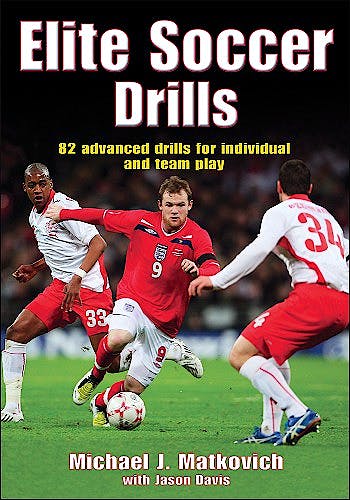 The game’s top players have remarkable speed, agility, and coordination demonstrated through precision passing, incredible ball control, and an uncanny ability to anticipate and react to the opposition’s moves. Although the best players can make these skills look easy, each is a result of dedication, commitment, and countless hours of practice.

In Elite Soccer Drills, renowned coach Mike Matkovich shares the same drills he has used in developing some of soccer’s premier players. The 82 drills emphasize execution in high-level play while addressing the finer points of passing and receiving, attacking and defending, and heading.

With drills for both individual players and teams, as well as practice tips and coaching suggestions, Elite Soccer Drills is the perfect practice tool for developing the high-level skills and soccer sense players need in order to excel.

Mike Matkovich joined the coaching staff of Chivas USA as the assistant coach in February 2008. A veteran of American soccer and founder of Chicago Magic soccer club, one of the most successful youth soccer clubs in the United States, Matkovich has coached at every level of the U.S. game, working with youth, high school, college, amateur, and professional teams.

Before joining Chivas USA, Matkovich served as an assistant coach for Toronto FC, an MLS team, during the team's inaugural campaign in Major League Soccer in 2007. Earlier, Matkovich served as director of Chicago Magic for 17 years. Under his tutelage the Magic was named Soccer America's No. 1 Boys Club in the nation in 2004, 2005, and 2006. While with the Magic, Matkovich was named National Coach of the Year and Regional Coach of the Year by the National Soccer Coaches Association of America, and the Illinois Coach of the Year by the Illinois Youth Soccer Association. Matkovich also served as the assistant coach of the Chicago Power of the indoor National Professional Soccer League from 1990 to 1994, where he won a national championship in 1990. He spent 2000 to 2006 at the helm of the Chicago Fire reserves of the Premier Development League, where he amassed a 71-8-7 record, which gave him the highest winning percentage of any coach in PDL history. A member of the U.S. national coaching staff, Matkovich holds a national A license from the USSF and has been a member of the NSCAA since 1992.

After a standout youth soccer career, Jason Davis helped the University of Akron win three conference championships. After college, Jason played professionally for the Pittsburgh Stingers, Detroit Neon, and Detroit Safari of the Continental Indoor Soccer League (CISL). While playing professionally, he began coaching local youth teams and decided to pursue coaching as a full-time career. Davis has coached at the club level for the Michigan Wolves-Hawks, Michigan Metrostars, and Vardar soccer clubs. He has also served as the director for the Michigan Metrostars and the Vardar Boys and Vardar Academy. He holds a USSF A license as well as the USSF national youth license and is a state and regional head coach for Michigan and the Region 2 Olympic development program.

“Elite Soccer Drills is a must for the serious soccer coach. Coaches Matkovich and Davis have put together a tremendous resource that I will use for years to come.”