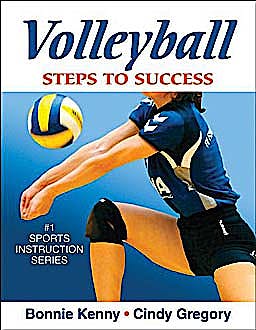 Cover the court with confidence by mastering the essentials of the game. Volleyball: Steps to Success offers a comprehensive, progressive approach with a proven system for learning, expert instruction, crisp illustrations, and 60 drills to improve play on both sides of the net.

Volleyball: Steps to Success establishes a solid foundation by detailing proper footwork and posture before moving on to the individual skills of serving, passing, setting, attacking, blocking, and digging. Recent changes in the game, such as the addition of the libero position and rally scoring, are highlighted in the team-oriented steps covering offense, defense, transitioning, and out-of-system play. The carefully selected drills and step-by-step instruction speed the development process, and the scoring system for each drill and step helps gauge progress along the way.

Aces, kills, blocks, digs, and assists are at your fingertips. With Volleyball: Steps to Success, part of the popular Steps to Success Series, you can become a complete player in any formation.

"Bonnie Kenny has been at the forefront of advancing volleyball—-both on and off the court—-for many years. Anyone who wants to improve his or her volleyball skills would benefit from this book."
Mary Wise -- University of Florida head volleyball coach

"I have always been impressed with Bonnie Kenny's knowledge of volleyball and approach to coaching. In Volleyball: Steps to Success, she teaches both players and coaches how to improve skill level and master the fundamentals."
Jim McLaughlin -- University of Washington head volleyball coach

"Coaches Kenny and Gregory provide a wonderful coaching resource that presents the sport in an easy to follow and sequential manner. I found this format to be logical and user-friendly, and I particularly think the sections that provide training exercises will prove valuable to a wide range of coaches. Volleyball: Steps to Success is one of the best new works in our sport in some time."
Doug Beal -- CEO, USA Volleyball

Bonnie Kenny has coached volleyball at the college level for more than 20 years at the University of South Carolina (1984-1992), the University of Massachusetts (1993-2001), and currently at the University of Delaware since 2002. Having won almost 400 career matches, Kenny ranks among the top 50 active Division I coaches for victories. She earned Atlantic 10 Coach of the Year and Colonial Athletic Association Coach of the Year honors in 1996 and 2004, respectively. Kenny was elected president of the American Volleyball Coaches Association (AVCA) for the 2006-2008 term. She earned academic all-America and all-SEC honors while playing at the University of Tennessee, where she was a four-time volleyball letter winner and led the Lady Volunteers to two SEC championships, three NCAA Tournaments, and a four-year record of 137-56. Kenny was also a 1982 U.S. Olympic Festival participant. In 2006 she was inducted into the University of Tennessee Lady Vols Hall of Fame.

Cindy Gregory is currently the associate head volleyball coach at the University of Delaware. Since the beginning of her coaching career in 1984, Gregory has served in both assistant coach and head coaching capacities at the college and high school levels. As head coach, Gregory led both the men's and women's volleyball teams at the Massachusetts Institute of Technology from 1992 to 1995. Gregory was named the New England Women's Eight Conference Coach of the Year and New England Women's Volleyball Association District Coach of the Year in 1993. She then teamed with Bonnie Kenny at the University of Massachusetts to compile a seven-year record of 125-93 between 1995 and 2001, including marks of 28-9 in 1996 and 24-15 in 1995. Gregory was a two-year letter winner at the University of Houston and Missouri State University, helping her teams place third twice at the AIAW National Volleyball Championships. She earned her master's degree in exercise physiology in 1986 from Texas Woman's University. Gregory has also been active with the NCAA YES program and with Special Olympics.